The main indices were evenly split yesterday with two moving higher and two moving lower. The Dow led the way with a gain of 0.11% and it was joined in positive territory by the S&P which gained 0.04%. The Nasdaq was the worst performer with a loss of 0.23% and the Russell lost 0.16%

The sectors were modestly skewed toward the bullish side with seven of the ten moving higher. The semiconductor industry came under pressure yesterday and that caused the tech sector to underperform with a loss of 0.42%, but that wasn’t the worst performance. That title went to the financial sector with a loss of 0.92%.

[hana-code-insert name=’adsense-article’ /]On the plus side, the consumer staples sector led the way with a gain of 1.16% and it was the only group with a gain over one percent.

The healthcare sector was the second best performer with a gain of 0.54% and it was followed closely by the energy sector which gained 0.52%.

My scans continued the trend of bullishly skewed results that have happened in the last few days.

The barometer jumped to 45.5 and that is its highest reading since August 17.

After four straight bullish trade ideas, I thought a bearish trade idea was in order to keep a little balance. The stock is Deere & Co. (NYSE: DE) and it appeared on the bearish list last night. The company’s fundamentals are actually pretty good with an EPS rating of 69 and an SMR rating of an A. However, the stock is caught in a downtrend and that is why it is today’s trade idea and a bearish one. 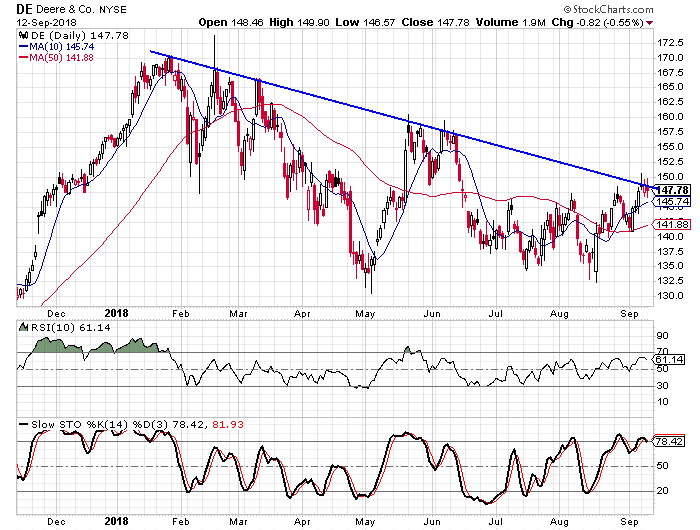 We see on the chart that the stock hasn’t been able to break out of the downward trend that started back in January. The trendline that has formed along the temporary highs over the past eight months has been very consistent and the stock just hit it again. We also see that the stock’s stochastic readings were in overbought territory and made a bearish crossover yesterday.

Buy to open the Oct18 $150-strike puts on DE at $6.00 or better. These options expire on October 19. The average loss when the stock has hit the trendline and been in overbought territory has been just under 10%. For these options to double we only need the stock to drop by 6.6%. I suggest a target gain of 100% and a stop-loss at $150.