All four of the main indices were lower in the morning yesterday, but all four rallied to close in positive territory. The ongoing trade dispute with China and the U.S. caused the losses in the morning, but investors shrugged those concerns off.

[hana-code-insert name=’adsense-article’ /]Despite the overwhelming positive moves by the indices, only six of the 10 sectors moved higher on Tuesday.

The top performing sector was the energy sector with a gain of 0.95%.

The tech sector was the second leading performer with a move of 0.85%.

My scans moved to a decidedly bullish skew on Tuesday with 82 names on the bullish list and only six on the bearish list.

Of all the stocks on the bullish list, there was one in particular that stood out for a combination of its chart, its fundamentals, and the option pricing. That stock is Energen (NYSE: EGN) and it is the subject of today’s trade idea. The company has an EPS rating of 76 and an SMR rating of a B. 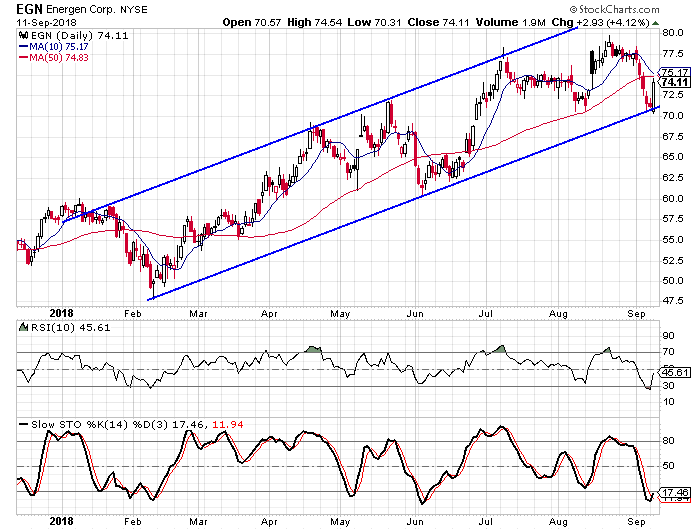 Energen has formed a trend channel over the past seven months and the stock just hit the lower rail of the channel. The stochastics just made a bullish crossover out of oversold territory like they did at the beginning of June, the beginning of May, and the original point of the channel in February. After those three instances, the stock jumped anywhere from 17.25% to 26% in the following weeks.