Three of the four main indices moved higher on Monday even as trade tensions continued to weigh on global markets. The Nasdaq led the way with a gain of 0.27%, narrowly beating out the Russell which gained 0.24%. The S&P logged a gain of 0.19% while the Dow was the lone index to register a loss at -0.23%.

[hana-code-insert name=’adsense-article’ /]The healthcare sector was the worst performer of the bunch with a loss of 0.28% while the financial sector (-0.14%) and the energy sector (-0.04%) were the other two sectors that finished in the red.

My scans produced 30 bullish signals and 22 bearish signals last night and that was enough to push the barometer in to positive territory.

The final reading for the barometer was 1.7 and that is the first positive reading since August 21.

The bullish list showed a nice mix of stocks from different sectors, but the bearish list primarily made up of utilities stocks and energy stocks.

There was one chart that stood out from the rest and the fundamental ratings are mixed on the stock. Archer Daniels Midland (NYSE: ADM) gets a 70 on the EPS rating, but only a D on the SMR rating. What this suggests is that the earnings growth is outpacing the sales growth and the profitability measurements. 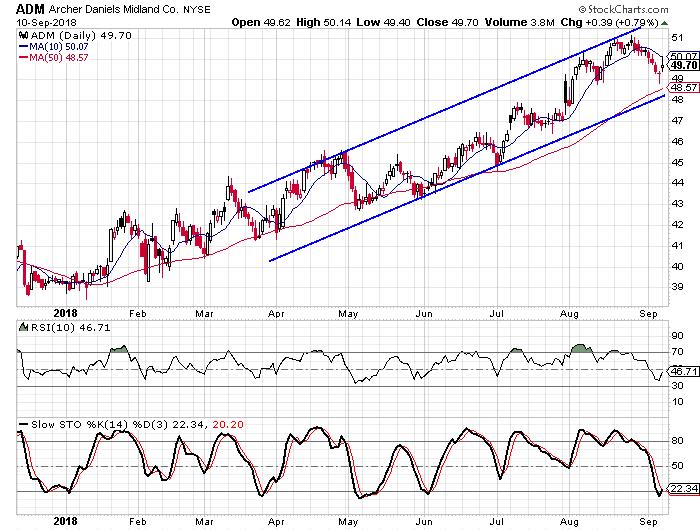 The chart for ADM shows that the stock has formed a trend channel since the beginning of 2018 and the stock came close to the lower rail last week. The stock bounced back yesterday and this allowed the stochastic readings to make a bullish crossover. The last few times the stochastics have been down in oversold territory and made a bullish crossover, we have seen rallies between 5 and 10%.

Buy to open the Oct18 $48-strike calls on ADM at $2.35 or better. These options expire on October 19. For these options to double we need the stock to rally at least 6%. That doesn’t seem unreasonable based on the rallies we saw from the three previous stochastic crossovers. I suggest a target gain of 100% with a stop at $48.25.