All four of the main indices lost ground on Friday and all four were down in the past week. As far as Friday, the Dow saw the worst loss at 0.31% and it was followed by the Nasdaq which logged a 0.25% loss. The S&P lost 0.22% and the Russell had the smallest loss at 0.08%. The indices were down despite a better than expected employment report for August.

Nine of the 10 sectors moved lower on Friday with the healthcare sector (+0.15%) being the only one in the green. Utilities suffered the worst loss at 1.22% and that probably has to do with the employment report.

[hana-code-insert name=’adsense-article’ /]Because the report was so strong, it cleared the way for another rate hike by the Fed and that make utilities less attractive for their yields.

The only other sector with a loss over a half percent was the materials sector which lost 0.66%.

My scans produced more signals on both sides Friday.

The barometer continued to climb with the relatively balanced scan results and the final number was -6.0.

Even though there were 47 names on the scans Friday night, none of the stocks or ETFs really stood out to me.

But that doesn’t mean I don’t have a trade idea for you. Today’s trade idea is a bullish one on the SPDR Gold Shares (NYSE: GLD). This play has to do with two things: gold is oversold and the sentiment is the most bearish since 2001. The Commitment of Traders report shows that large speculators are net short gold for the fourth straight week and this hasn’t happened in 17 years. 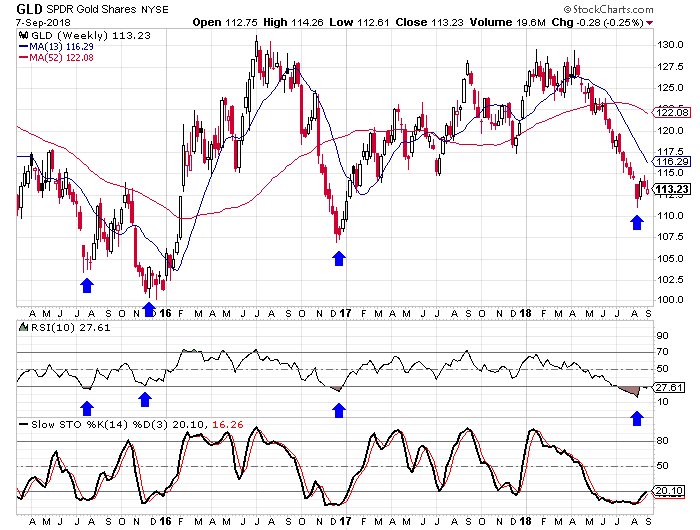 We see on the chart that the GLD is in oversold territory on both the 10-week RSI and the weekly stochastics readings. The past three times these two indicators were both in oversold territory at the same time, we saw rallies. The rally in mid-2015 was a minor one while the ones at the beginning of 2016 and 2017 were both pretty strong rallies.

Buy to open the Jan19 $111-strike calls on GLD at $4.80 or better. These options expire on January 18, 2019. This is a little longer term trade than we generally have in this report, but that gives the trade room to play out. For these options to double we will need to see the ETF at $120.60, at least on an intrinsic value. I can see the GLD reaching that area with little problem. I would suggest a minimum target of 100% for this trade and if you want to be more aggressive close half at 100% and let the second half run. I would also suggest a stop at $110.