Three of the four main indices moved lower yesterday as the Dow (+0.09%) was the lone one to gain ground. It was aided by the pharmaceutical and the consumer staples components. The Nasdaq got hit the hardest with a loss of 1.19% and it was followed by the Russell with a loss of 0.33%. The S&P notched a loss of 0.28%.

The sectors were mixed as well, but the skew of the sectors was the opposite of the indices. There were six sectors that moved higher and four that moved lower.

Those were the only two with gains over one percent.

On the negative side, the tech sector was down 1.25% and it was followed by the consumer discretionary sector with a loss of 1.06%.

The scans were still bearishly skewed last night, but the differential between the two lists narrowed dramatically.

After two straight bullish trade ideas, I have a bearish one for you today. FireEye (Nasdaq: FEYE) appeared on the bearish list and the fundamental ratings aren’t very good. The EPS rating is only a 24 and the SMR rating is an E. The company has lost money in each of the last four quarters and it has a negative profit margin. 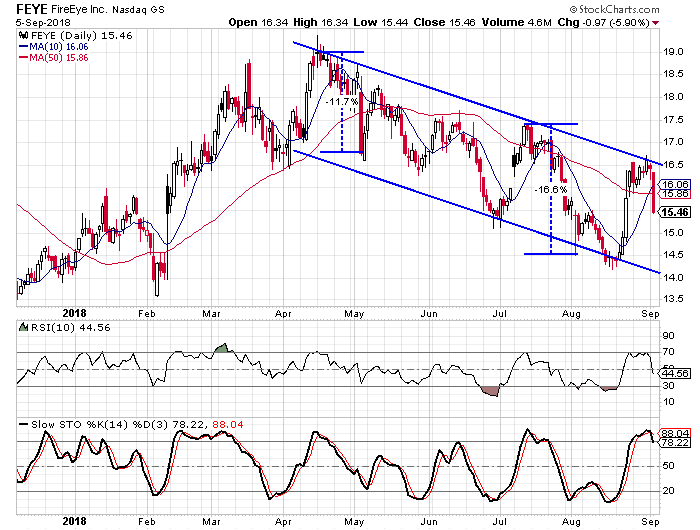 FireEye has formed a downwardly-sloped trend channel over the last five months and it just hit the upper rail of the channel. The daily oscillators both hit overbought territory and turned lower yesterday. This is something we saw in April and July. On those occasions we saw double-digit losses in the following weeks.

Buy to open the Oct18 $17-strike puts on FEYE at $1.90 or better. These options expire on October 19. The stock will need to drop to $13.20 for these options to double. That is slightly below the lower rail at this point, but the lower rail is pointed down and at a steep incline. I would suggest a target gain of 100% and a stop at $16.75.