All four of the main indices moved lower yesterday and there was a noticeable uptick in volume after the holiday. The Russell was the worst performer with a loss of 0.46% and it was followed by the Nasdaq with a loss of 0.23%. The S&P lost 0.17% and the Dow held up the best, but still notched a loss of 0.05%.

The sectors fared better than the indices with three moving higher and seven moving lower. The financial sector led the way with a gain of 0.55% and the utilities sector was the second best performer with a gain of 0.49%.

[hana-code-insert name=’adsense-article’ /]On the down side, the healthcare sector turned in the worst performance with a loss of 0.74% and the telecom sector recorded a loss of 0.71% as the second worst performer.

The scans continued their negative tone last night with 45 names on the bearish list and only nine on the bullish list.

Once again the lists were biased toward the bearish side, but it was a stock on the bullish list that caught my eye.

This time it was Altria Group (NYSE: MO) that garnered my attention. The company scores well with an 83 on the EPS rating and it gets a B in the SMR rating category. 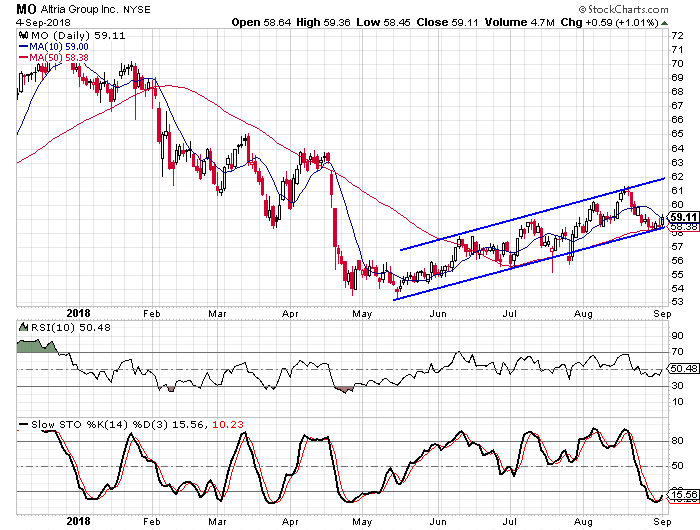 Altria has formed a short-term trend channel over the last three and a half months and the stock has just hit the lower rail of that channel. The stochastics have just made a bullish crossover after hitting their lowest reading since late April and I think that is a great sign for the coming weeks.