The indices saw relatively muted results in the pre-holiday trading on Friday. Three indices moved higher while the Dow lost 0.09%. The Russell led the way with a gain of 0.48% and the Nasdaq notched a gain of 0.26% for the second best performance. The S&P eked out a gain of 0.01%.

The sectors saw mixed results as well, but the majority finished lower instead of higher. There were six sectors that moved lower with the energy sector seeing the worst loss at 0.77%.

On the plus side, the consumer discretionary sector notched the only significant gain at 0.39%.

The other three sectors in the green gained less than 0.1%.

The scans continued to produce more bearish results than bullish ones on Friday.

The final tally was 51 names on the bearish list compared to only seven on the bullish side.

The barometer dipped to a reading of -46.7 and that is the worst reading since July 13.

Despite the greater number of bearish readings, it was a stock on the bullish list that got my attention more than any other. American Eagle Outfitters (NYSE: AEO) has a really good EPS rating at 92 and the SMR rating is above average at a B. In addition, the stock has a fair amount of pessimism direct toward it. The short interest ratio is at 4.45 and out of 19 analysts following the stock, 12 rate it a “hold” or worse. 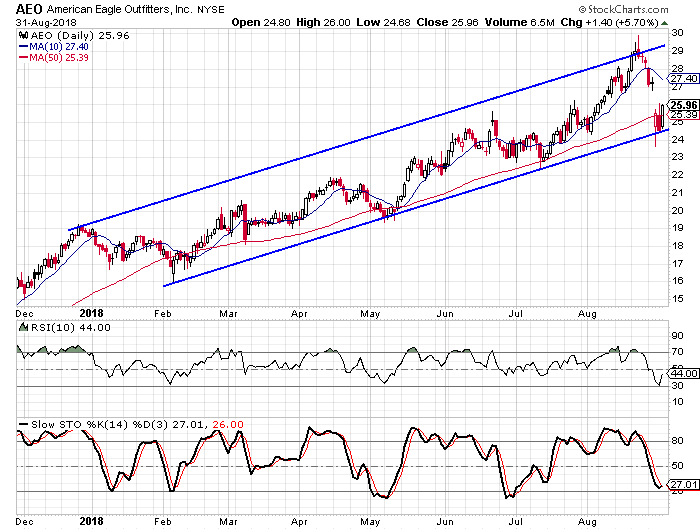 You can see on the chart that the stock has formed a trend channel over the past seven months and it just bounced off of the lower rail of that channel. The stochastics didn’t quite reach oversold territory on this recent dip, but they did make a bullish crossover on Friday and we see similar instances prior to rallies in February, May, and July.

Buy to open the Oct18 $24-strike calls on AEO at $2.70 or better. These options expire on October 19. The stock will need to reach $29.40 for these options to double and that is approximately where the upper rail of the channel is now. The rail should be much higher in the next month. I suggest a target gain of 100% with a stop at $24.50.