The indices reversed course yesterday and all four moved lower. The Dow was the worst performing one with a loss of 0.53%. The S&P experienced the second worst loss at 0.44% and the Nasdaq lost 0.26%. The Russell lost 0.18% and that was the best performance of the day from the indices.

The sectors also reversed and rather than nine of the 10 moving higher yesterday, nine moved lower. The only sector that gained ground yesterday was the utilities sector with a gain of 0.04%.

[hana-code-insert name=’adsense-article’ /]The materials sector lost 1.13% and that was the worst performer of the bunch.

The financial sector lost 0.8% and that was the second worst performance.

The scans broke out of their quiet period last night with 99 names on the bearish list and eight stocks on the bullish list.

That is the biggest negative reading from the scans since July 11.

The barometer dropped from -6.1 to -39.8 when these figures were added in to the equation.

There were an abundance of stocks and ETFs to choose from on the bearish list, and I decided to go with one that has been the subject of a trade idea before. Just one month ago I suggested a bearish trade idea on the iShares MSCI Emerging Markets ETF (NYSE: EEM) and that trade worked for a 100% gain. 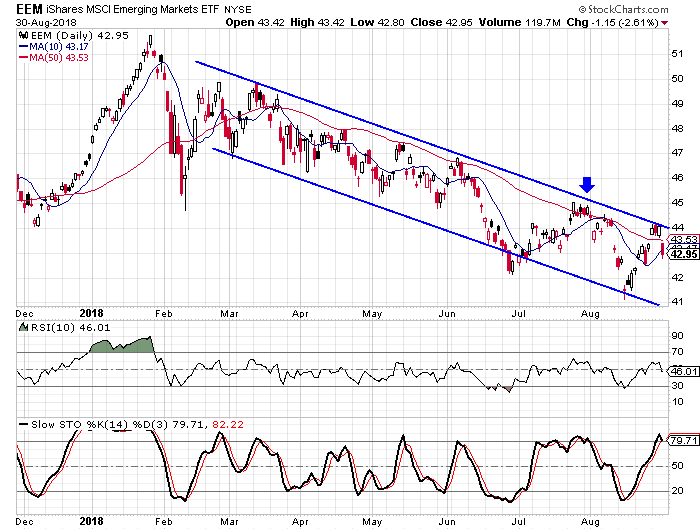 We see the same channel is in play again and the EEM just hit the upper rail again before dropping yesterday. The blue arrow is there to point out the timing of the last bearish trade idea. You can also see that the stochastic readings just made a bearish crossover like it did in early June and late July.