Nine of the 10 sectors moved higher yesterday with the financial sector (-0.03%) being the lone group in the red. The consumer discretionary sector gained 1.13% as the leading performer.

[hana-code-insert name=’adsense-article’ /]The tech sector notched a gain of 0.87% as the second best performer and the materials sector (0.72%) finished third.

My scans continued to produce lower total numbers and this is the fourth straight night with less than 30 stocks combined between the two lists.

Last night showed nine names on the bullish list and 15 on the bearish side.

The barometer moved slightly higher and ended at -6.1.

The stock is Finisar (Nasdaq: FNSR) and the fiber optics company has poor fundamentals. The EPS rating from IBD is at 24 and the SMR rating is a D. The company saw both earnings and sales decline in the most recent quarter. 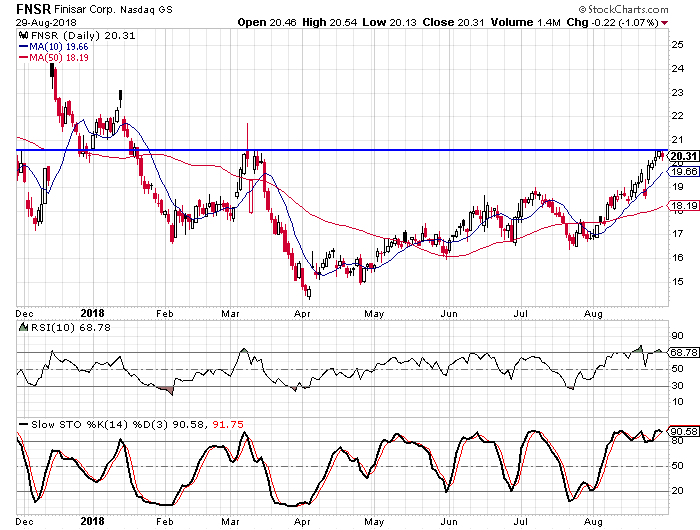 The company is expected to announce earnings next Thursday, September 6, so this trade idea carries a little more risk and should be treated accordingly. We see on the chart that the stock has been rising, but is now facing resistance in the $20.50 range. The stock stalled there in March and then dropped sharply over the next three weeks.