The indices snapped their string of days with all four moving higher on Tuesday. Only three of the four moved higher while the Russell (-0.01%) lost ground. The Nasdaq led the way, but the gain was only 0.15%. The Dow notched a gain of 0.06% and the S&P gained 0.03%.

The sectors were mixed yesterday, but it was a little surprising to see six moved lower and only four moved higher considering that three of the four indices were higher. The consumer discretionary sector led the way with a gain of 0.19% and it was followed by the tech sector with a gain of 0.17%. The energy sector lost the most ground with a loss of 0.41% and it was followed by the materials sector with a loss of 0.33%.

[hana-code-insert name=’adsense-article’ /]My scans were somewhat muted again last night with only 26 total stocks making up the two lists.

Adding these figures in to barometer calculation caused it to rise to -11.4 from -22.4.

Given the limited options between the two lists, I was actually surprised at the number of stocks with strong fundamentals on the bullish list.

In fact, the fundamentals of the stocks on the bearish list were quite good as well.

That left me with a decision and I chose a bullish trade idea.

The company is one we have had a trade idea on before and it is Zoetis (NYSE: ZTS). There was a bullish trade idea on the pharmaceutical company back on July 26 and that one worked out quite well. The company gets a 94 on its EPS rating and an A on the SMR score. 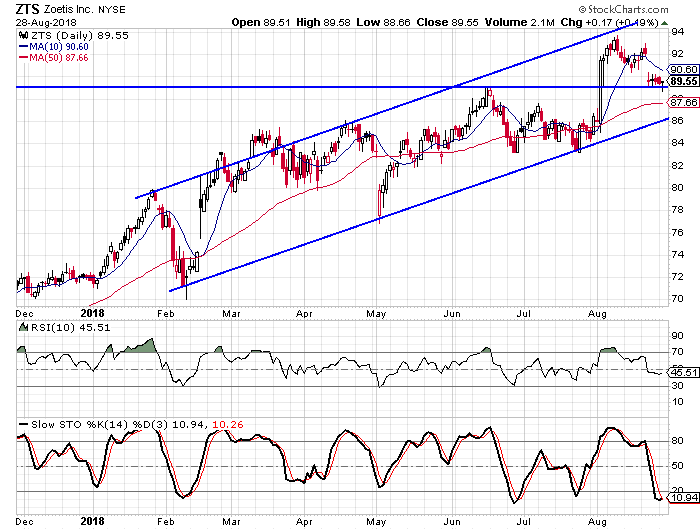 The stock jumped after its earnings report and has since dropped back a little. What got my attention was that the recent little dip seems to have been halted in the $89 area and that same area acted as resistance back in June before it dipped. I have seen it happen many times where former resistance turns in to support after the stock breaks through and experiences a pullback.

Buy to open the Oct18 $87.50-strike calls on ZTS at $4.00 or better. These options expire on October 19. I look for the $89 area to continue acting as support and for the stock to bounce from here. The stock will need to get to $95.50 for these options to double, but I don’t think that will be a problem as the upper rail of the channel should be well above that level in about a week. I suggest a target gain of 100% with a stop at the $88 level.