The four main indices all moved higher again on Monday after some apparent progress in the trade discussions between the U.S. and Mexico in particular. The Dow led the way with a gain of 1.01% and it was followed by the Nasdaq which posted a gain of 0.91%. The S&P notched a gain of 0.77% and the Russell lagged the others with a modest gain of 0.15%.

Once again we saw nine of the ten main sectors move higher on Monday. This time around it was the utilities sector that stood alone in negative territory with a loss of 0.63%.

[hana-code-insert name=’adsense-article’ /]The materials sector led the way once again and once again it gained 1.3%.

My scans were relatively balanced last night with 12 stocks on the bullish list and 16 on the bearish list.

The nearly neutral reading allowed the barometer to climb to -22.4 from -36.3.

The one stock that stood out the most for the combination of its fundamentals and its charts was Aptiv PLC (NYSE: APTV).

The Irish-based company manufactures electronic components for automotive manufacturers. The company gets an EPS rating of 71 from IBD and an A on its SMR rating. 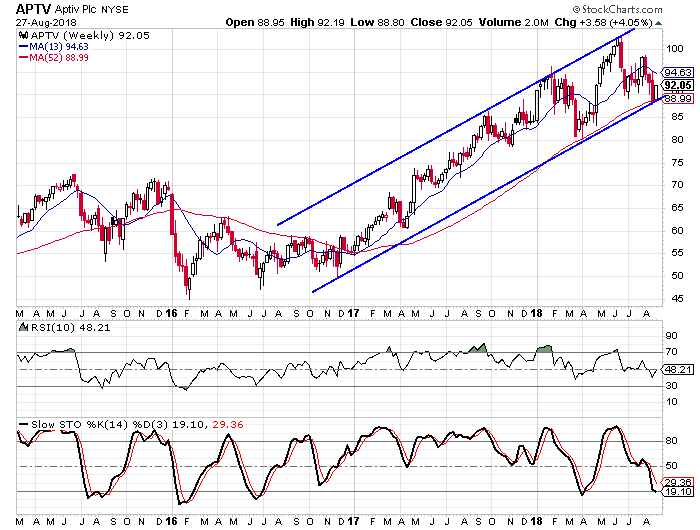 The weekly chart shows how the stock has been moving higher over the last two years and a trend channel has formed. The lower rail of the channel is in close proximity to the stock’s 52-week moving average and that is providing a second layer of support. I look for a similar bounce to the one that occurred from April through June.

Buy to open the Oct18 $90-strike calls on APTV at $5.00 or better. These options expire on October 19. When the stock hit the lower rail of the channel in April and the weekly stochastic readings were in oversold territory, the stock jumped over 25% in the next few months. In this case, the stock would jump to the $110 area if we saw a similar move. Expecting a gain of gain of 300% seems a little excessive, so I would suggest a target of at least 100% for the first half of the trade. If that is and the stock isn’t overbought, I would suggest holding the second half to shoot for a bigger gain—maybe in the 200% range. I would also suggest a stop at $87.50.