The four main indices all moved higher on Friday with the Nasdaq leading the way. The tech-laden index gained 0.86% on the day and it was followed by the S&P with a gain of 0.62%. The Dow gained 0.52% and the Russell logged a gain of 0.5% as the worst performing index.

Nine of the ten main sectors moved higher on the day with the consumer staples sector being the lone one in the red with a loss of 0.13%. The materials sector led the way on Friday with a gain of 1.3%.

[hana-code-insert name=’adsense-article’ /] The tech sector gained 1.01% as the second leading performer and it was the only other sector to gain over one percent.

My nightly scans didn’t produce as many names on either side on Friday.

There were six names on the bullish list and 17 on the bearish side.

I looked back on my records and the last time we saw so few stocks and ETFs between the two lists was on April 10.

While there weren’t many stocks on the bullish list, the results of their IBD ratings were impressive.

All six had EPS ratings over 64 and all the SMR ratings were either A’s or B’s.

The stock that got my attention more than any other was Electronic Arts (Nasdaq: EA). The EPS rating for EA is a 73 and the SMR rating is a B. These weren’t the highest ratings, but combined with the chart and the risk/reward potential made it today’s trade idea. 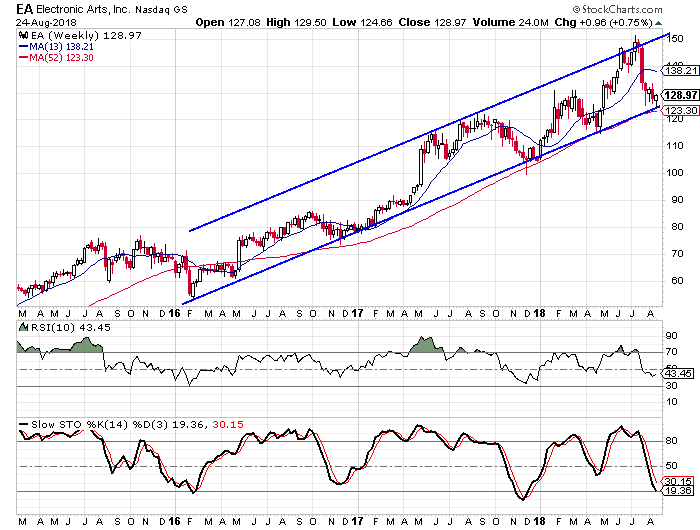 The weekly chart shows how the stock has been moving higher inside a trend channel over the last two and a half years. The stock just touched the bottom rail of the channel this past week. The lower rail is also in close proximity to the 52-week moving average and that makes the area even stronger as support.

Buy to open the Oct18 $125-strike calls on EA at $8.20 or better. These options expire on October 19. These options will double if the stock moves to $141.40 and that is well below where the upper rail will be in a few weeks. It is also well below the recent high, so the stock won’t have to break through resistance to hit our target. I suggest a target gain of 100% with the 52-week moving average as a stop.