All four of the main indices moved lower yesterday and that is the first time that has happened in seven trading days. The Russell suffered the worst loss, but it was only 0.32%. The Dow had the second worst loss at 0.30% and it was followed by the S&P with a loss of 0.17%. The Nasdaq held up the best and logged a loss of only 0.13%.

Eight of the ten main sectors moved lower yesterday with the tech sector (+0.19%) and telecom sector (+0.10%) being the two that moved higher.

[hana-code-insert name=’adsense-article’ /]On the downside, the materials sector suffered the worst loss at 0.68% and it was followed by the energy sector with a loss of 0.48%.

The scans continued to trend toward a more bearish skew with 59 names on the bearish list and only three one the bullish list.

The barometer dropped to a reading of -44.3 once these results were added in to the equation.

That is the lowest reading for the barometer since July 13.

There were several stocks that caught my attention on the bearish list last night, but there was one in particular that I felt offered the best risk/reward relationship with the highest probability.

That company is pharmaceutical and medical supply distributor McKesson (NYSE: MCK). The company scores a 67 on IBD’s EPS rating and a C on the SMR rating which isn’t horrible, but the stock has been trending lower and has a pattern in its chart. 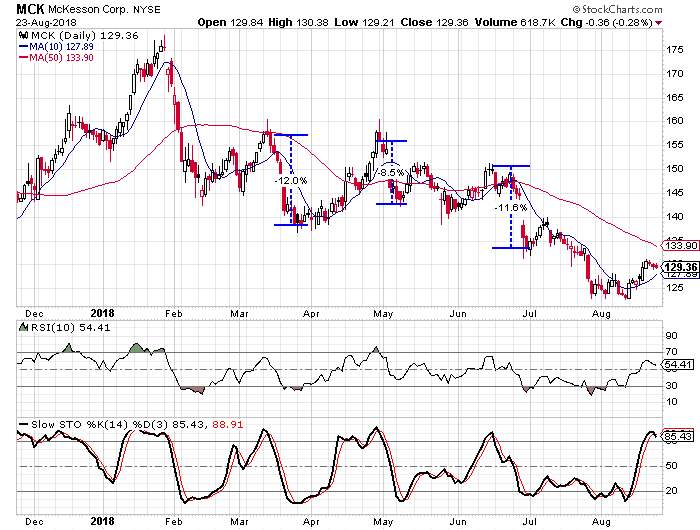 The pattern shows how the stock has declined three out of the last four times the stochastics have made a bearish crossover after reaching overbought territory. The percentage declines have been significant enough that it makes for a high conviction trade.

Buy to open the Oct18 $130-strike puts on MCK at $5.00 or better. These options expire on October 19. In order for these options to double the stock will need to drop to $120. That is only 7.2% from where the stock closed yesterday. Based on the past three bearish crossovers in the stochastics and the percentage declines after them, I don’t think a drop to $120 will be a problem. I suggest a target gain of 100% with a stop at $131.25.