The indices finished split yesterday with the Russell and Nasdaq moving higher while the Dow and S&P finished lower. That snapped a four-day winning streak for the S&P and that was the longest winning streak since February. The final numbers showed the Nasdaq gaining 0.38% and the Russell gained 0.26%. The Dow experienced the worst loss at 0.34% while the S&P only lost 0.04%.

The sectors were slightly skewed to down side with six finishing lower and only four finishing higher. The energy sector led the way with a gain of 1.2% as oil prices jumped for a fourth straight day.

[hana-code-insert name=’adsense-article’ /]On the down side, the industrial sector lost 0.97% for the worst performance and it was followed by the 0.8% by the utilities sector.

My scans turned decidedly more bearish last night with 73 names on the bearish list and only 10 on the bullish list.

The net score of -63 is the worst single day reading since July 11 and it took the barometer in to negative territory with a reading of -25.4.

Today’s trade idea comes from the bearish list which makes it the second bearish idea out of the last eight.

The stock is International Business Machines (NYSE: IBM) and the stock gets average to slightly above average on the IBD ratings, but the chart is the main driver behind this trade. The EPS rating is a 44 and the SMR rating is a B. 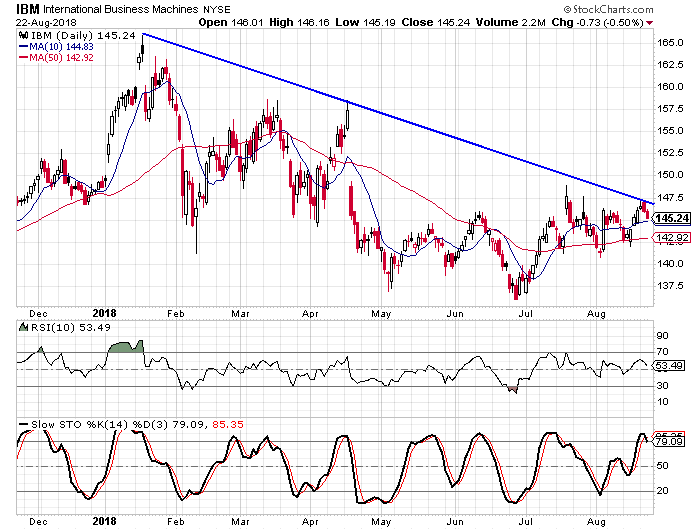 You can see the downtrend the stock has been in since January and how the highs all connect very nicely along a trendline. The stock hit that trendline on Monday and has since turned lower the last two days. This caused the stochastic readings to make a bearish crossover out of overbought territory. They did the same thing at the high in January and again in April when it hit the lower high that created the trendline.