All four of the main sectors moved higher on Friday with two of them tying for the top spot. Both the Dow and the Russell gained 0.43% on the day. The S&P gained 0.33% on the day and the Nasdaq lagged slightly but still logged a gain of 0.13%. Another round of trade meetings between the U.S. and China was enough encouragement for investors to become buyers again.

All ten sectors moved higher on Friday with the consumer staples sector leading the way with a gain of 0.77%.

[hana-code-insert name=’adsense-article’ /]The materials sector was the second best performer with a gain of 0.74%.

Consumer discretionary (+0.09%) and technology (+0.15%) lagged the other sectors, but still posted gains.

The barometer remained above 50 after Friday’s scans with the final reading at 50.4.

The one name that jumped out at me from the bullish list was Micron Technology (Nasdaq: MU).

The company has pulled back since reporting earnings back in late June, but it still has strong fundamentals. The EPS rating is at 95 and the SMR rating is an A. 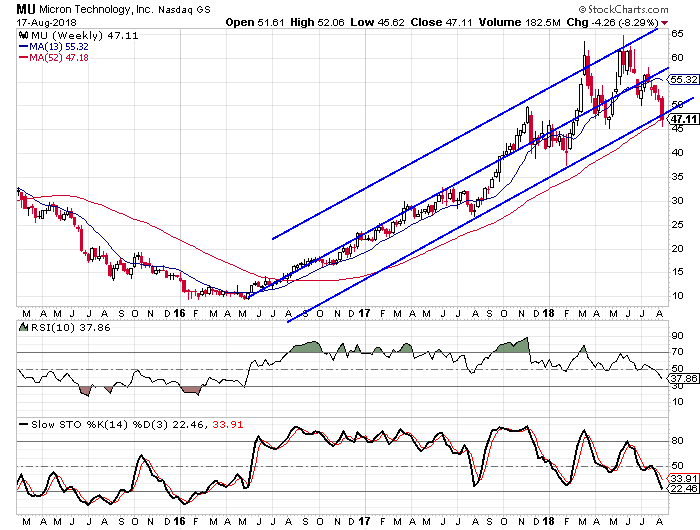 Micron has been trending higher since mid-2016 and the regression line marks the angle of the climb. I drew the outer lines free-hand, so the channel isn’t exactly a regression channel or a standard deviation channel. I felt like it captured the outlier readings where the stock moved substantially away from the regression line. I also like the fact that the stock closed right at its 52-week moving average. You can also see that the stock is the most oversold it has been since the rally started in 2016.

Buy to open the Oct18 $46-strike calls on MU at $4.00 or better. These options expire on October 19. The stock will need to rally up to $54 for these options to double, but I don’t think that will be a problem. The last two bounces have been for $20 or more and that would put the stock up around $65. I would suggest a 100% gain as the minimum target and I would also suggest a stop at $45.50.