Stocks jumped sharply yesterday as hope for progress in the trade negotiations sparked investor confidence and strong earnings results from Walmart and Cisco Systems brightened the outlook. All four of the main sectors experienced solid gains and it was the Dow that led the way with a gain of 1.58%. The Russell gained 0.90%, the S&P gained 0.79%, and the Nasdaq lagged a little but still gained 0.42%.

All ten sectors moved up on Thursday and half of them gained over 1.0%. The telecom sector led the way with a gain of 1.75% and it was followed by the consumer staples sector with a gain of 1.47%.

[hana-code-insert name=’adsense-article’ /]Technology gained the least on the day with a move of 0.43% and the consumer discretionary sector only notched a gain of 0.49% as the second worst performer.

Adding those results in to the barometer calculation caused it to jump to 51.2 from 6.1.

That is the highest reading since July 3 for the barometer.

After pouring over all of the stock on the bullish list, the one that made the most sense to be was a bullish trade idea on Abbott Laboratories (NSE: ABT). The company scores an 81 on IBD’s EPS rating system and it gets an A in the SMR category. 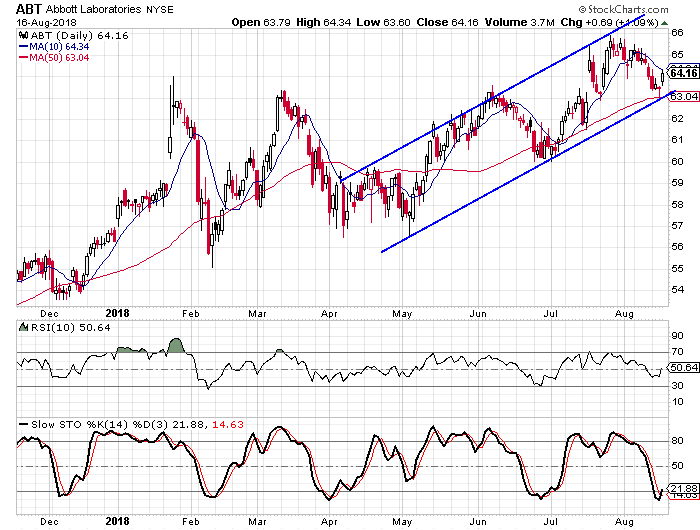 We see on the chart that the stock has formed an upwardly-sloped trend channel over the past three and a half months and the stock has just bounced off of the lower rail. We also see that the stochastic readings just made a bullish crossover like it did in late June. After that crossover the stock gained over 9% in the next month.