All four of the main sectors moved down yesterday as the trade war concerns re-entered the picture. The Russell lost 1.29% on the day and was the worst performer with the Nasdaq a close second at -1.23%. The S&P lost 0.76% and the Dow lost the least, but still lost 0.54%.

Eight of the ten sectors lost ground on Wednesday. The utilities sector led the way with a gain of 0.87% while the consumer staples sector gained 0.41%. The energy sector got crushed yesterday and lost 3.54%.

[hana-code-insert name=’adsense-article’ /]The materials sector lost 1.59% and the consumer discretionary sector lost 1.22% as the only other two that lost more than one percent.

My scans produced more bullish signals than bearish signals for the third straight day and that moved the barometer in to positive territory.

The barometer came in with a reading of 6.1 after being at -9 the night before.

I don’t normally like to suggest two companies from the same industry on consecutive days, but the best opportunity that I saw was from the steel industry again last night. Steel Dynamics (Nasdaq: STLD) was on the bullish list and the company gets a 94 on the EPS rating system and an A on the SMR rating system from IBD. 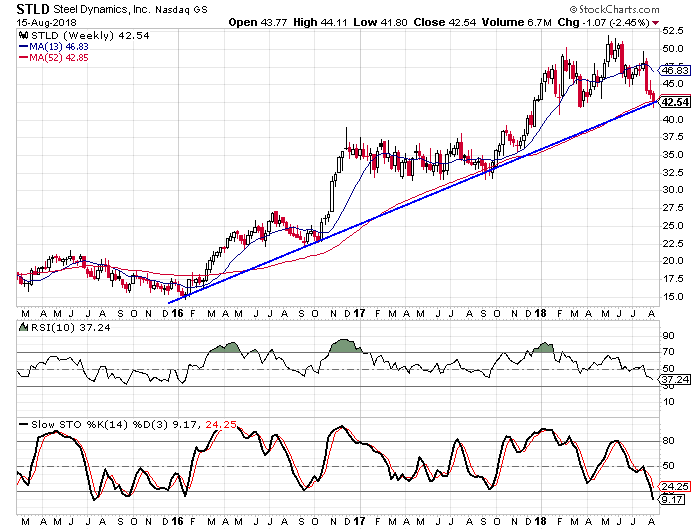 The stock has been trending higher for the last few years with a trendline connecting the lows from 2016 and 2017. The stock is sitting right on this trendline now and that trendline is right at the 52-week moving average which gives the stock two layers of support. The stock is also the most oversold it has been since the beginning of ’16 based on the weekly stochastic readings.

Buy to open the Nov18 $42-strike calls on STLD at $3.20 or better. These options expire on November 16. When the stock hit the trendline and the moving average last September it rallied almost 23% over the next month and a half. A rally of that size this time around would put the stock above $51 a share and that would make these options worth $9.00. That would make for a gain of 180%. I would set a target gain of at least 150% and would suggest a stop at the $41 level.