All four of the main indices moved higher yesterday with the Russell leading the way with a gain of 0.97%. The Nasdaq (+0.65%) and the S&P (+0.64%) experienced similar gains while the Dow lagged the others with a gain of 0.45%. One of the things that helped lift stocks around the world was a rebound by the Turkish lira.

All ten sectors moved up on Tuesday. The consumer discretionary sector led the way with a gain of 0.97% and it was followed by the financial sector which gained 0.90%.

For the first time in almost two weeks, my scans produced a solid bullish skew.

One name on the bullish list that jumped out at me was Nucor Corp. (NYSE: NUE).

The steel manufacturer has seen its earnings grow at an average rate of 41% over the last three years and by 107% last quarter.

Those numbers give the company an 87 on IBD’s EPS rating and the company gets a B in the SMR rating. 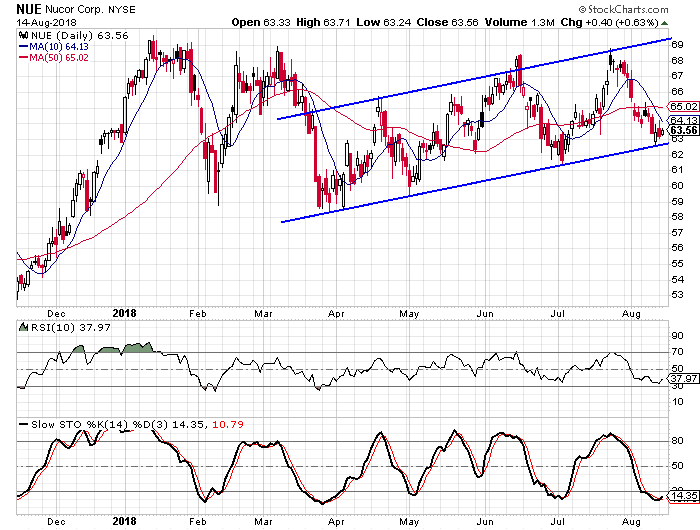 The stock has formed a trend channel over the last five months and the stock just hit the lower rail of the channel. We can also see that the stochastic readings hit oversold territory and have now made a bullish crossover. This has also happened at the other lows that helped form the channel.

Buy to open the Sep18 $62.50-strike calls on NUE at $2.60 or better. These options expire on September 21. The upper rail of the channel is up around $69.50 and that would make these options worth $7.00. That would give investors a gain of 170%. The timing on this trade idea is going to be critical as expiration could arrive before the stock reaches the upper rail, but the options will double if the stock reaches $67.70.