All four of the main indices moved lower again on Monday. The three main indices opened higher, but then turned lower by midday. The Russell lost 0.68% and that was the worst performance of the bunch. The Dow lost 0.5% for the second worst loss and it was followed by the S&P with a loss of 0.4%. The Nasdaq spent a good portion of the day in positive territory, but finished with a loss of 0.25%.

Six of the ten sectors moved lower while three moved higher and one was unchanged on the day. The consumer staples sector was the one that was unchanged.

[hana-code-insert name=’adsense-article’ /]The energy sector was the worst performer with a loss of 1.3% and it was followed by the materials sector with a loss of 0.99%.

My scans ended their string of negative readings, but not by much.

When I added these results in to calculations for the barometer, the result was a reading of -26.9 which was up from -39.4.

After three straight bearish trade ideas, I have a bullish trade idea for you today and the company is Estee Lauder (NYSE: EL). The company gets an 84 on the IBD EPS rating system and it gets an A in the SMR rating. The company will report earnings on Monday, August 20, but I like the way the trade is setting up. There is a degree of pessimism ahead of the report with a short interest ratio of 5.11. 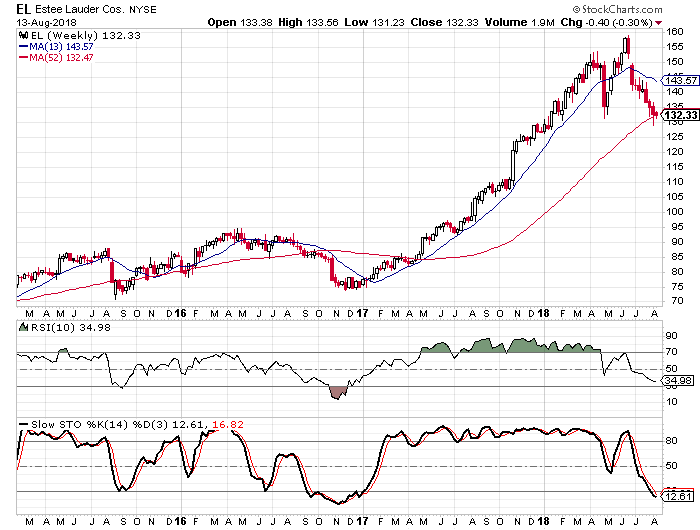 The stock has pulled back over the last nine weeks and the stock is oversold based on the weekly stochastic readings. The stock is sitting just above its 52-week moving average. It is also worth noting that the stock found support at the $132 area back in the spring when it pulled back.

Buy to open the Oct18 $130-strike calls on EL at $7.70 or better. These options expire on October 19. These options will need to reach $15.40 to double and that would put the stock at $145.40 on an intrinsic basis. Based on how the stock bounced back from the pullback in the spring that target seems doable. I suggest a target of a 100% gain and would suggest a stop if the stock moves below $131.