All four of the main indices lost ground on Friday, but the big three lost a lot more ground than the Russell. The small cap index only lost 0.14% while the Dow lost 0.77%. The S&P logged a 0.71% loss and the Nasdaq dipped 0.67%. Concerns about Turkey and its economy weighed on stocks around the globe.

Nine of the ten sectors dropped on Friday with the energy sector gaining 0.52%. This could also be a result of the concerns over Turkey as the country is crucial in transporting oil from the Middle East to Europe.

[hana-code-insert name=’adsense-article’ /]Any disruptions in the transportation could impact the energy markets.

On the down side, the materials sector took the biggest loss at 1.39% and it was followed by the financial sector with a loss of 1.13%.

Those were the only two sectors with losses greater than one percent.

My scans continued to produce a greater number of bearish results than bullish ones with 62 names on the bearish side on Friday.

There were only 11 names on the bullish list. This took the barometer down to -39.4.

Once again there were a number of stocks on the bearish list that will announce earnings in the week ahead. Unlike yesterday’s trade idea, today’s is not due to announce earnings this week and the company is AT&T (NYSE: T). The company appeared on my bearish list and the fundamentals aren’t that great. The IBD scores are a 69 on the EPS rating and a C on the SMR rating. 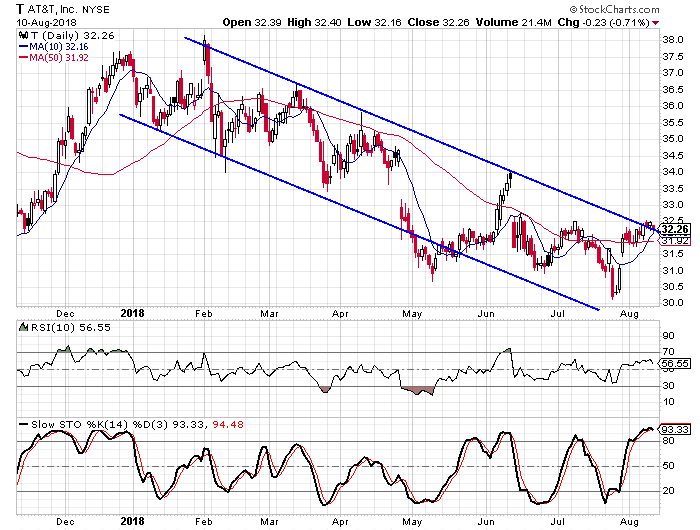 You can see how the stock has been trending lower over the last eight months and a trend channel has formed as a result of this downward trend. The stock had moved just above the upper rail of the channel and is now attempting to drop back in to the channel. The oscillators are the most overbought they have been since mid-June, and those high readings came just before a big decline.