[hana-code-insert name=’adsense-article’ /]The energy sector was the worst performer with a loss of 0.94%.

There were 56 names on the bearish list and only nine on the bullish list. The barometer dipped to a reading of -26.

Something I took note of while scanning both the bullish and bearish lists last night was the number of stocks on the bearish list that report earnings in the coming days.

There were at least four that I know of and one of them was Agilent Technologies (NYSE: A). The company reports on Tuesday and the ratings are mixed with an A SMR rating and only a 57 on the EPS rating. The sentiment is skewed slightly to the bullish side—a bearish sign from a contrarian viewpoint. 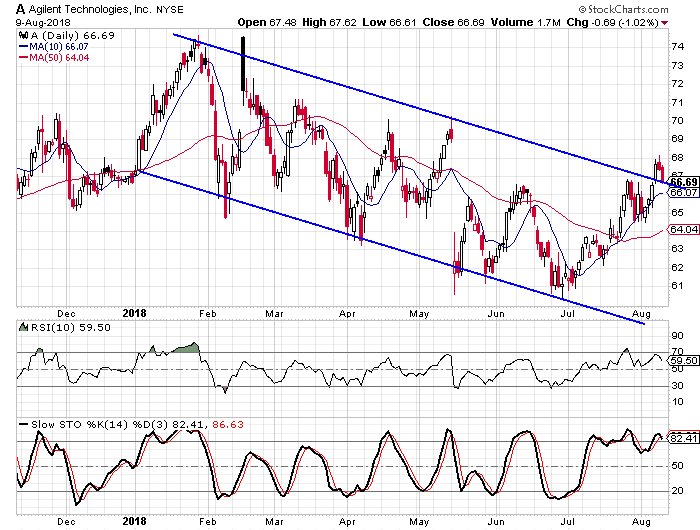 We see the downward trend in the stock and it just moved above the upper rail and now looks like it will reenter the channel. The big gap lower in May was the result of the company’s last earnings report. Even with the downward trend and earnings miss, analysts are decidedly bullish and short sellers have shied away from the stock.

Buy to open the Sep18 $67.50-strike puts on AMC at $2.60 or better. These options expire on September 21. This is a riskier trade idea because of the earnings report, but if we see a big gap lower like we saw last time, the stock would drop below the $60 level and these options would be worth at least $7.50 and a gain of close to 200%.