The main indices experienced very modest moves on Wednesday with none of them experiencing a move of more than 0.2%. The Dow experienced the biggest move with a loss of 0.18%. The S&P was also down, but only by 0.03%. The Russell was down 0.02% and the Nasdaq was the only one that gained ground with gain of 0.06%.

The sectors were mixed with six moving down and four moving higher. The consumer staples sector experienced the worst loss at 0.8% and the energy sector lost 0.72%.

[hana-code-insert name=’adsense-article’ /]I am actually surprised energy stocks weren’t down more as oil was down over 3% on the day.

The tech sector led the way yesterday with a gain of 0.26% and financials gained 0.19% as the second best performer.

This took the barometer back in to negative territory at -8.5 from a reading of 7.6 on Tuesday.

One name that stood out last night was AMC Entertainment Holdings (NYSE: AMC) and it was on the bearish list.

The company scores a 42 on IBD’s EPS rating system and it gets a D in the SMR rating. The company has a profit margin of -5.8% and earnings have been flat over the last three years. 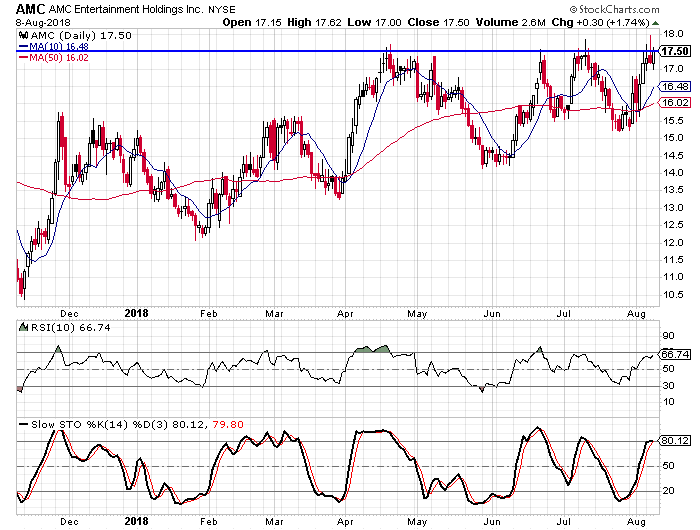 The stock has experienced resistance at the $17.50 level several times over the last four months and has yet to close above that level. I am looking for that resistance to continue since the stock is overbought based on the stochastic readings. We also see that the overbought readings in July and August were followed by moves to the downside.

Buy to open the Sep18 $18-strike puts on AMC at $1.50 or better. These options expire on September 21. While I normally suggest a target of 100% on these trade ideas, in this case the stock would have to get down to $15 and that would mean breaking through the recent support. I can see the stock moving back down to the $15.25 range again and that would make these options worth $2.75 and a gain of 83%. I would recommend shutting the trade down if the stock closes above $17.60.