Once again the four main indices moved higher on Tuesday and this time it was the Dow that led the way with a gain of 0.50%. The other three indices experienced similar gains with the Nasdaq gaining 0.31%, the S&P gained 0.28%, and the Russell gained 0.25%. This is the sixth straight day of gains for the Nasdaq and four straight for the S&P.

Eight of the 10 main sectors moved higher on Tuesday while two moved lower and one was unchanged.

[hana-code-insert name=’adsense-article’ /]The healthcare sector was the one that was unchanged while consumer staples (-0.63) and utilities (-0.17%) were the two that lost ground.

Because of the second straight night of balanced results, the barometer dropped from 10.2 to 7.6.

The stock that caught my attention for its fundamentals as well as its chart was ON Semiconductor (Nasdaq: ON).

ON was on the bullish list last night and the company gets an EPS rating of 88 and an SMR rating of an A from Investor’s Business Daily. 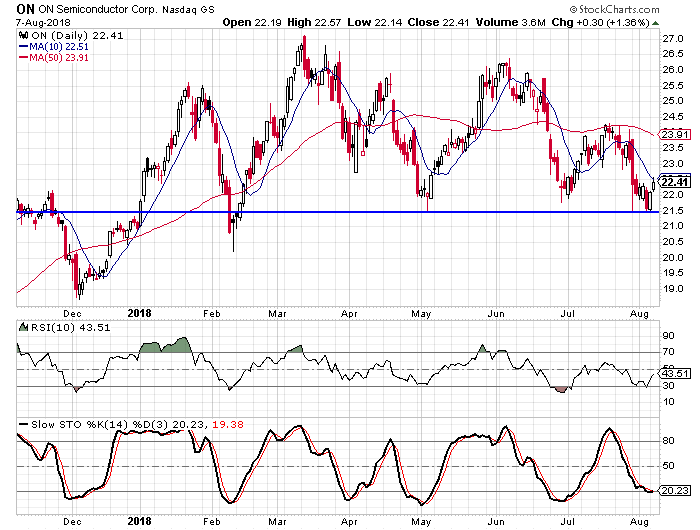 There were items of interest on both the daily and weekly charts of ON that got my attention. The daily chart shows how the stock found support at $21.50, just as it did in May and it came close in late June. On the weekly chart, the stock briefly dipped below its 52-week moving average last week and has bounced back above it this week. I look for the bounce to continue.

Buy to open the Sep18 $21-strike calls on ON at $2.00 or better. These options expire on September 21. These options have very little time premium priced in to them as they are $1.41 in-the-money. The rally in May took the stock up over 22% and I wouldn’t be surprised if we see a similar rally this time. Given the price of the options and the price of the stock, we only need a rally of half that for these options to double. I would target 100% gain and then close half and wait and see what happens with the second half. If the stock gets back up to its recent high, these options will be worth $5.38 on an intrinsic basis and that would mean a gain of 169%. I suggest a stop at $21.40.