Nine of the 10 main sectors moved higher for the second straight day. The one sector in the red yesterday was the materials sector with a loss of only 0.02%. On the plus side, the telecom sector led the way with a gain of 1.36% and that was far and away the best performance.

My scans were dead even last night with 16 stocks on both the bullish list and the bearish list.

The barometer dropped to 10.2 from 14.2 once these results were added in.

Interestingly each list had one sector that accounted for seven of the 16 names.

The one stock that stood out the most was on the bearish list and it was Nektar Therapeutics (Nasdaq: NKTR). The biotech firm scores a 13 on the EPS rating from Investor’s Business Daily and it scores a D on the SMR rating. The company has seen sales decline over the last three years and it has lost money in three of the last four quarters. The company is set to announce earnings on Wednesday, so this trade idea carries more risk than usual. 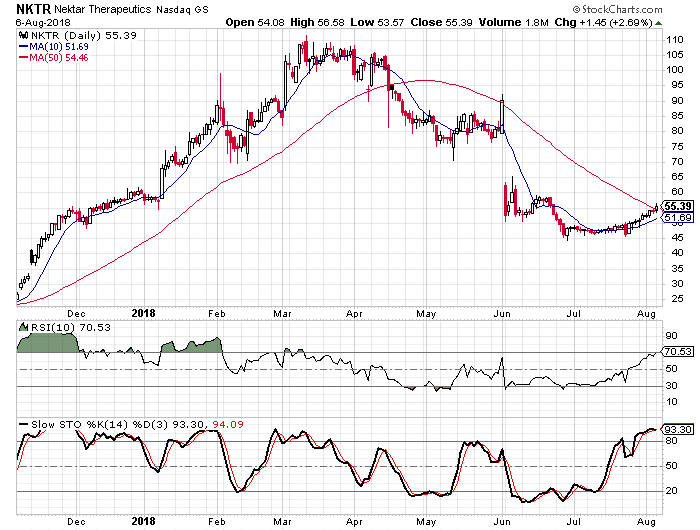 Buy to open the Sep18 $55-strike puts on NKTR at $4.50 or better. These options expire on September 21. There is a big gap between the bid and ask on these options so I suggest trying to buy them between the two prices. The stock will need to drop to $46 for these options to double and I would suggest that as a target. I would also suggest a stop at $58. Remember, this is a riskier trade idea than usual.