The only index that moved higher on Wednesday was the Nasdaq with a gain of 0.46%. The other three suffered minor losses—the Dow got the worst of it with a loss of 0.32%, the S&P lost 0.10% and the Russell lost 0.09%. The Fed left interest rates where they were and that was expected, but even when the Fed does what is expected, we usually see more volatility than what we saw yesterday.

Seven of the 10 main sectors moved lower yesterday while two were higher and the financial sector was unchanged. The energy sector took the biggest loss at 1.39% and it was followed by the industrial sector with a loss of 1.35%.

[hana-code-insert name=’adsense-article’ /]The tech sector led the way yesterday with a gain of 0.87% and that was on the back of Apple’s earnings report Tuesday night.

My scans moved back to a bearish skew last night with 43 bearish signals and 27 bullish signals.

The stock that jumped out at me the most last night was a familiar one as we played had a bullish trade idea on it back on May 31.

The company is Worldpay Inc. (NYSE: WP) and it appeared on the bullish list again last night.

The company’s fundamentals are just as strong as they were back then with an 87 EPS rating and an A rating on the SMR. 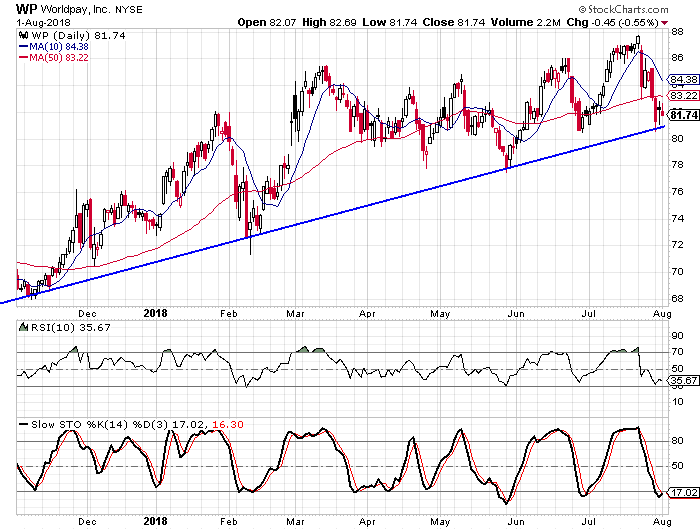 The chart is the same one I used back in May, I just extended the trendline out a few months. The stochastic readings just made a bullish crossover like they did then as well and there was another development I found that is setting up like it did back then. The 10-week RSI on WP just dipped below the 50 level and it has only done that three times in the last year and each time the stock rallied afterwards. The rallies were 20.8%, 14.9% and 11.2% within two to three months.