The tech sector gained 0.25% after several harsh days of selling.

The barometer dipped slightly to a reading of -6.6.

Something I noticed about each of the two lists was that they were both very mixed in terms of the sectors represented, but there wasn’t a single tech stock on either list.

That is quite unusual.

There was one stock in particular that jumped out at me last night from the bullish list and that was Immunomedics (Nasdaq: IMMU). The biotech firm doesn’t have the best fundamental ratings, but the chart was too much to pass up. The company gets a terrible EPS rating of 15 and it doesn’t have an SMR rating because there isn’t a return on equity at this time. That makes this trade much riskier than the usual trade idea and the company reports earnings on August 16. 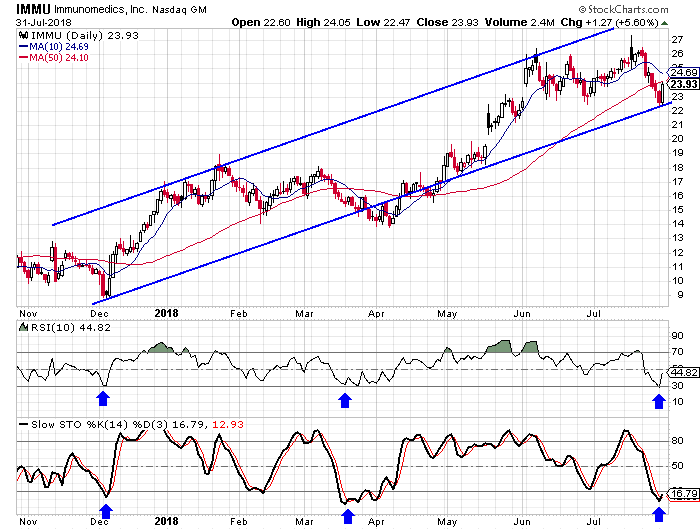 Obviously it was the chart that caught my eye since the fundamentals aren’t up to our usual standards. The first thing that got my attention was the trend channel. Then I noticed a pattern in the oscillators. When the stochastics and RSI have both been in or near oversold territory, the stock has experienced sharp rallies over the past year. The rally from the beginning of December to the beginning of February saw the stock gain 97% and the rally from mid-March through the beginning of June saw the stock gain 74%. There is also some pessimism toward the stock with a short interest ratio of 6.97 and that gives the stock a greater chance at rallying.

Buy to open the Oct18 $22-strike calls on IMMU at $4.00 or better. These options expire on October 19. The stock will need to reach $30.00 for the options to double and that is a gain of 25.4% from yesterday’s closing price. Given the giant gains mentioned above, that gain seems easily attainable. I would set a target gain of at least 100% and use $22.00 as a stop-loss point.