All four indices moved lower on Monday with three of them having almost identical percentage declines. The Dow lost 0.57% while the S&P lost 0.58% and the Russell lost 0.64%. The Nasdaq got hit harder than the other three indices and took a loss of 1.39%. The S&P and Nasdaq have dropped for three straight days while the Dow and Russell have lost ground for two days in a row.

Seven of the 10 main sectors lost ground again while two moved higher and the financial sector was unchanged. The tech sector got hit hard again on Monday and lost 1.53% as the worst performer.

[hana-code-insert name=’adsense-article’ /]The industrial sector lost 0.97% as the worst performer.

The energy sector led the way with a gain of 0.87% and the healthcare sector (0.11%) was the only other one in positive territory.

The results were enough to move the barometer back in to negative territory with a reading of -6.4.

Of the 38 names on the bearish list, the one that stood out the most was the iShares MSCI Emerging Markets ETF (NYSE: EEM). 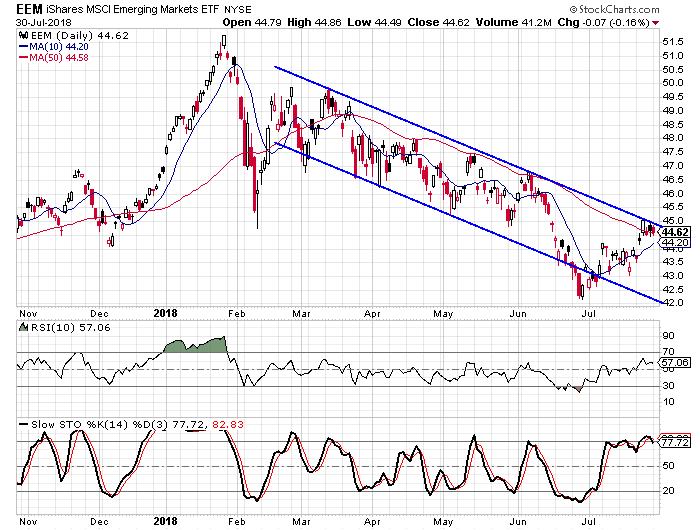 The EEM has been trending lower since January and has formed a downwardly-sloped trend channel over the last five months. The fund hit the upper rail of the channel last week and has now started turning lower and that has created a bearish crossover in the stochastic readings. The 50-day is in the same vicinity and that trendline has been acting as resistance for the last three months.

Buy to open the Sep18 $46-strike puts on EEM at $2.00 or better. These options expire on September 21. These options will double if the fund drops to $42 and that is where the lower rail of the channel is currently and it will move lower in the coming weeks. I would set a target of at least 100% for these options and would suggest a stop loss at $45.25.