Stocks saw a little selling pressure yesterday and three of the four main indices fell as a result. The Russell 2000 was the long gainer on the day with a move of 0.52% to the upside. The Dow had the worst loss at 0.53% while the S&P (-0.39%) and Nasdaq (-0.37%) experienced more modest losses.

The sectors were skewed to the down side as you would expect given the index performances. There were seven that moved lower and three that moved higher on Thursday. The financial sector was the worst performer by far with a loss of 1.52%.

[hana-code-insert name=’adsense-article’ /]The telecom sector was second worst with a loss of 0.64%.

My scans turned more bearish again after the selling and the barometer dropped further in to negative territory as a result.

The company scores a 77 on the EPS rating, but that is mainly due to its most recent earnings report. Over the last three years earnings have declined by an average of 17% per year while sales have been declining by an average of 21% per year over that same period. The SMR rating is a D on the company.  Both the ROE and profit margin are in the single digits. 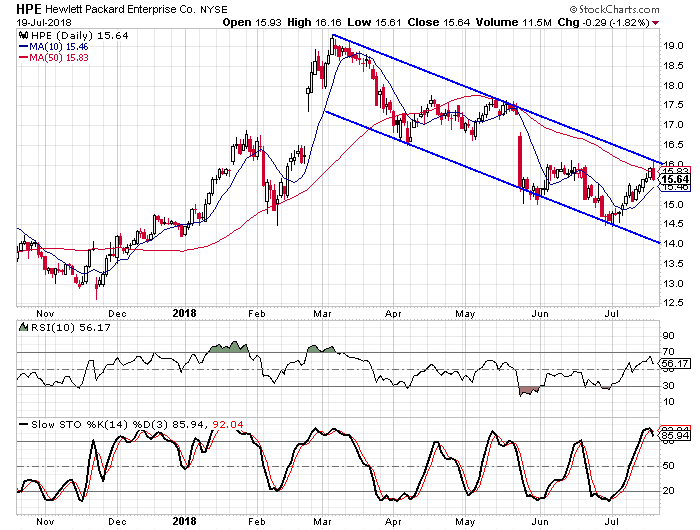 We see on the chart how HPE has been trending lower since early March and it has done so in a very cyclical pattern. The trend channel that has formed has been pretty reliable and the stock just hit the upper rail while the stochastic readings reached overbought territory and then rolled over.