The main indices were a little mixed with their performances on Wednesday in that the Dow and S&P moved steadily higher throughout the day while the Nasdaq and Russell both opened in negative territory and struggled to stay in positive territory.

[hana-code-insert name=’adsense-article’ /]The sectors were split right down the middle with five moving higher and five moving lower.

My scans continued to produce bearishly skewed results on Wednesday with 34 names on the bearish list and 22 names on the bullish list.

After two straight bullish trade ideas, I have a bearish one for you today. MGM Resorts International (NYSE: MGM) appeared on the bearish list last evening and the company’s fundamentals are average to below average. The IBD ranks are 46 on the EPS rating and a C on the SMR rating.

The company saw earnings drop by 24% in its last earnings report and sales have only grown at a rate of 5% over the last three years. The company also announced a lawsuit on Tuesday against the victims of the mass shooting from last October. The suit was filed in order to avoid liability, but it is being widely criticized by the public and could become a public relations nightmare for the company. 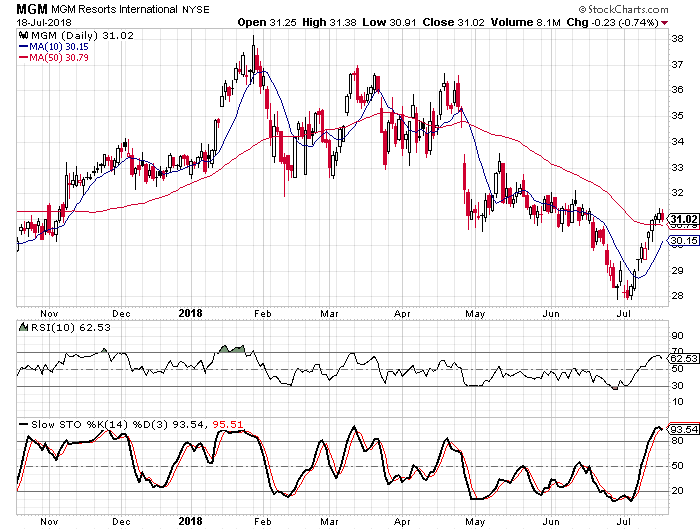 What caught my attention more than anything on the chart was the bearish stochastic crossover while the readings are in overbought territory. We saw a similar development in April just before the stock dropped sharply after its earnings report. MGM is due to release earnings on August 2.