All four of the main indices moved higher yesterday as trade talks took a back seat to earnings and President Trump’s meeting with Russian President Putin. The Nasdaq led the way with a gain of 0.63% followed by the Russell 2000 with a gain of 0.56%. The S&P gained 0.4% and the Dow lagged the others after leading the way for two straight days, but it still managed a gain of 0.22%.

[hana-code-insert name=’adsense-article’ /]Energy lost 0.36% as the worst performer while utilities and telecom were the other two sectors that finished in the red.

My scans continued to move toward a more balanced level with 23 bullish signals and 28 bearish signals.

The -5 differential between bullish and bearish signals is the closest one since July 6.

The name that jumped out at me the most from last night’s scans was E*Trade Financial Corp. (Nasdaq: ETFC) and it was on the bullish list.

The company gets great scores from IBD’s ratings’ systems with a 99 on the EPS rating and an A on the SMR rating. The company is set to announce earnings on Thursday after the closing bell. 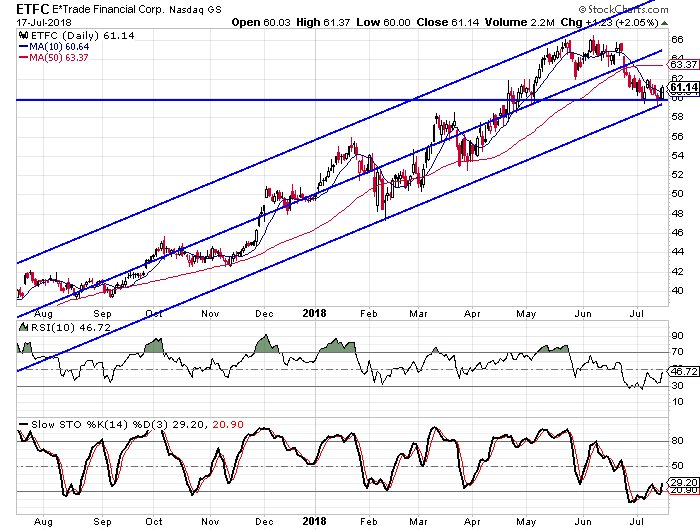 There are two factors on the chart that I like—the double dip down below the $60 level and the regression channel. The stock just dipped to the lower rail of the channel and then bounced back. We also see how the stochastics were hovering around the 20 level like they did back in February before the stock bounced.

Buy to open the Aug18 $60-strike calls on ETFC at $2.85 or better. These options expire on August 17. Given the impending earnings announcement, these options don’t have very much implied volatility built in to them. They are $1.14 in the money meaning you are paying approximately 40% for intrinsic value and 60% for time premium. This is an aggressive trade idea because of the earnings, but it also offers the potential for a higher reward. I would use a target of $67 with a stop at $59.