The indices experienced mixed results again on Monday only the results were the opposite from Friday—instead three being up and one being down, three were down and only one was up yesterday.

The financial sector led the way with a gain of 1.74% after Bank of America’s earnings beat estimates and helped moved the whole sector.

My scans were bearishly skewed again last night, but the differential did shrink considerably.

The barometer rose from -52.2 to -34.5 as the difference continues to narrow from last week’s big negative readings.

The chart that stood out most and then the fundamentals matched the technical pattern was Momo Inc. (Nasdaq: MOMO). The Chinese internet operator has an EPS rating of 96 from IBD and the SMR rating is an A. The earnings and sales growth have been incredible over the last three years. 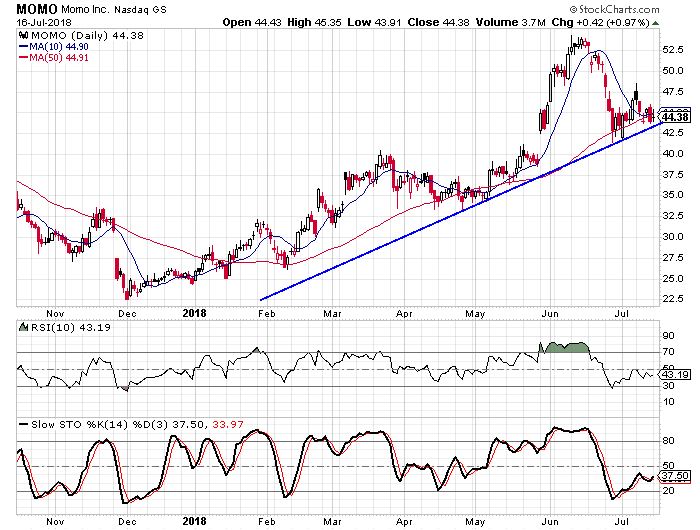 The chart shows how the stock has been trending higher for the last eight months and there is a trendline that connects the lows from May and June. The stock is hovering just above that trendline and is dancing around its 50-day moving average. We see that a similar pattern in the stochastics developed in April and May and that happened just before the stock jumped sharply.

Buy to open the Sep18 $40-strike calls on MOMO at $7.00 or better. These options expire on September 21. For these options to double the stock will need to get to $54 and that is a 21.6% gain. That makes this trade idea riskier than the usual ones I give, but the stock has had three moves over 25% so far this year. I would suggest a stop at $42.50.