The indices were somewhat mixed with their Friday performances with one posting a loss, two posting small gains and one posting a solid gain. The Dow was the one with a solid gain and it was 0.38%. The S&P only gained 0.11% while the Nasdaq gained 0.03%. The Russell logged a loss of 0.19%. Both the Nasdaq and Russell were both significantly higher in the morning before selling off in the afternoon.

The sectors were also split with six moving higher and four moving lower. The consumer staples sector led the way with a gain of 0.65% while the energy sector posted the second best gain at 0.53%.

[hana-code-insert name=’adsense-article’ /]The telecom sector was the worst performer with a loss of 1.19% and it was followed by the financial sector with a loss of 0.44%.

Citigroup, JPMorgan Chase, and Wells Fargo kicked off earnings season on Friday and the results were underwhelming.

My scans continued their string of bearishly skewed results with 35 names on the bearish list and only five on the bullish list.

One stock that stood out was Agilent Technologies (NYSE: A) and it was on the bearish list.

Like the trade idea on Macy’s on Friday, this one doesn’t have the weakest fundamentals that I normally look for with a bearish idea, but the chart was the main driver behind the trade.

The stock scores a 58 on IBD’s EPS rating and it gets an A in the SMR category. 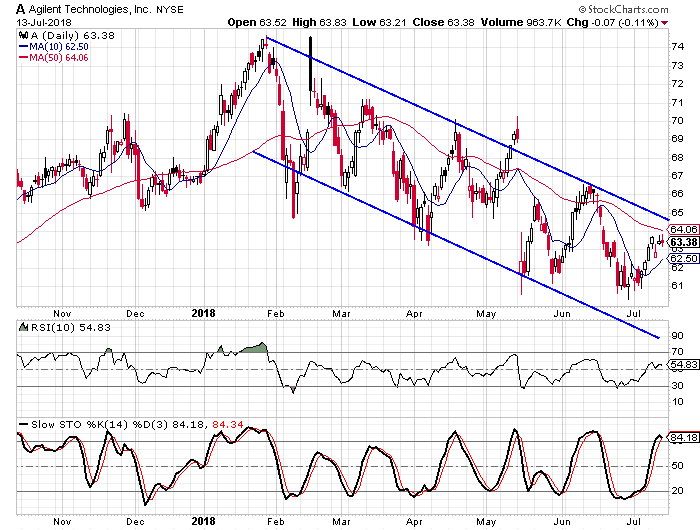 Buy to open the Sep18 $65-strike puts on A at $3.40 or better. These options expire on September 21. Because the stock would have to break to a new 52-week low, I am setting a lower target profit for this trade idea. I would set a target of $60 for the stock which would put these options at a profit of right at 50%. I would suggest a stop at $65.