After moving higher for four straight days, the three main indices all suffered losses yesterday while the Russell 2000 experienced a second straight loss. The Dow suffered the biggest loss at 0.88% followed by the S&P with a decline of 0.71%. The Nasdaq lost the least at 0.55% while the Russell also lost 0.71%.

Nine of the sectors moved lower on the day, but three in particular got hit the hardest. The energy sector lost 2.15% as the worst performer. The materials sector was the second worst performer with a loss of 1.68% followed by the industrial sector with a drop of 1.61%.

[hana-code-insert name=’adsense-article’ /]Those were the only three sectors with losses over one percent.

The only sector that gained ground was the utilities sector with a gain of 0.90%.

My scans were extremely bearishly skewed last night with 113 bearish signals and only two bullish signals.

That is the biggest bearish skew since April 20.

Adding these numbers in to the barometer calculations caused it to drop to -56.4 and that is the lowest reading for it since May 16.

Given the lack of names on the bullish list, it stands to reason that today’s trade idea is a bearish one and the subject company is Altice USA (NYSE: ATUS).

The fundamentals for the company are terrible. It scores a 15 on IBD’s EPS rating and a D on the SMR rating. The EPS dropped 70% last quarter as sales were flat. The company has a profit margin of -14.3%. 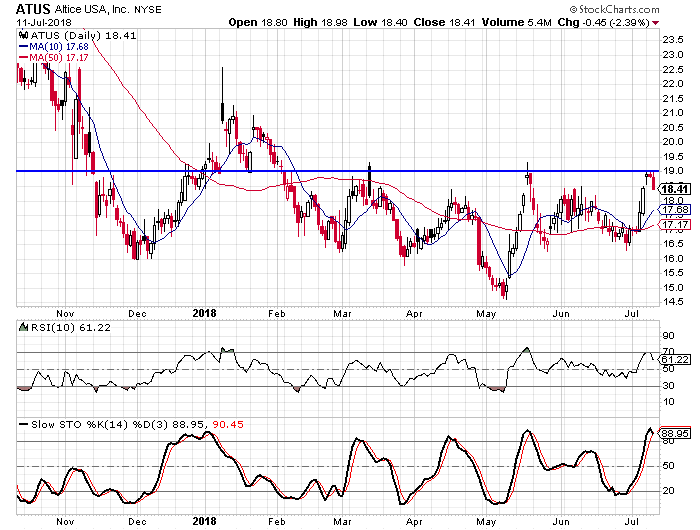 The stock has had trouble moving above $19 over the last five months and it appears that it will halt the stock once again. The oscillators are/were both in overbought territory prior to yesterday’s pullback and the stochastic readings made a bearish crossover.

Buy to open the Sep18 $19.97-strike puts on ATUS at $2.35 or better. These options expire on September 21. The options have an odd strike price after the company declared and paid a special dividend of $2.035 on June 7. An adjustment was made to all previously existing option strikes. I think the stock drops back down to the $15.50 area and this would mean a double on these options. I would recommend closing the trade if the stock closes above $19.