The indices experienced mixed results yesterday with two moving up solidly, one that was mostly flat and one that was down. The Dow led the way with a gain of 0.58% and the S&P gained 0.35%. The Nasdaq was the flat one with a gain of only 0.04% and the Russell lost 0.53% on the day.

All four opened higher and then the Russell turned negative early on. The Nasdaq dipped in the early afternoon and actually spent most of the afternoon in the red before a late rally moved it in to positive territory.

[hana-code-insert name=’adsense-article’ /]Nine of the sectors moved higher on the day and they were led by consumer staples sector with a gain of 1.19%.

The lone sector in the red for the day was the financial sector which is interesting given that earnings season kicks off on Friday with three of the big banks reporting.

My scans were bearishly skewed for the second straight night with 48 names on the bearish list and only six on the bullish list.

When these numbers were added in to the barometer calculations, it turned negative with a reading of -14.1. That is the first negative reading since June 21.

Colgate-Palmolive (NYSE: CL) was one of the names on the bearish list and its chart caught my attention along with lackluster fundamentals. The company gets a 53 on IBD’s EPS rating and it doesn’t have an SMR rating. The reason it doesn’t have an SMR rating is because the ROE is 0%. The EPS have been flat for the last three years and sales have declined by an average of 3% over the same time period. 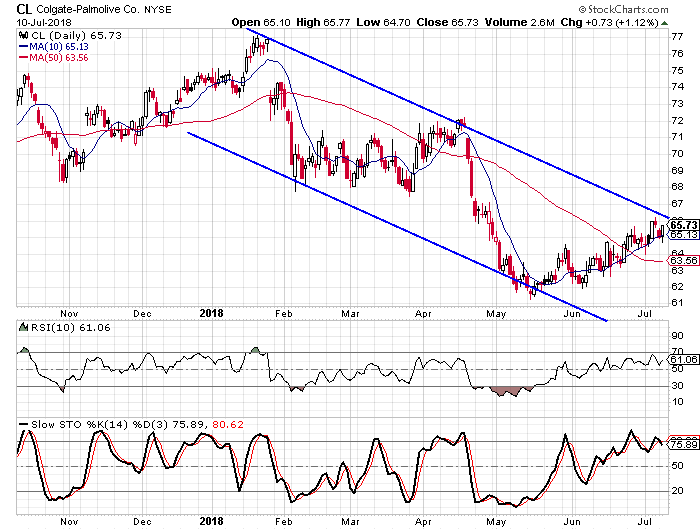 The stock has been trading in a downward sloped trend channel for the last six months and it is approaching the upper rail of the channel currently. The pattern in the stochastic readings is similar to what we saw in April where they moved in to overbought territory, moved below the 80 mark, and then back above 80 again before the stock dropped sharply.