Once again all four main indices moved higher on Monday. The Dow led the way with a gain of 1.31%. The Nasdaq and S&P tied for the second best performance with identical gains of 0.88%. The Russell lagged slightly, but still logged a gain of 0.59%. Volume was up considerably from last week’s holiday influenced volume levels.

Eight of the sectors moved higher on the day with four sectors managing gains of at least one percent. The financial sector led the way with a gain of 2.32% and it was followed by the industrial sector with a gain of 1.83%.

[hana-code-insert name=’adsense-article’ /]The energy sector (1.52%) and the consumer discretionary sector (1.2%) were the other two with gains over one percent.

My scans halted their run of bullish skews as there were 21 bearish signals and 15 names on the bullish list.

The big bullish readings from last week are starting to have less weighting in the barometer and it has dropped to a reading of 5.1 as a result.

Last night’s scans were a little odd. To explain I need to share my process with you.

First I run my bullish and bearish scans and save them in a spreadsheet. I then run each list through IBD that produces the EPS ratings, SMR ratings, and a few others. Once I have these numbers I color code the ratings with green for positive readings and red and orange for negative readings. Last night was odd because there were more green marks on the bearish list and more orange and red marks on the bullish list. Despite the odd outputs, I did find one stock on the bearish list where the chart points toward a move down and the fundamentals were only average. Consolidated Edison (NYSE: ED) scores a 63 on the EPS rating and a C on the SMR rating. 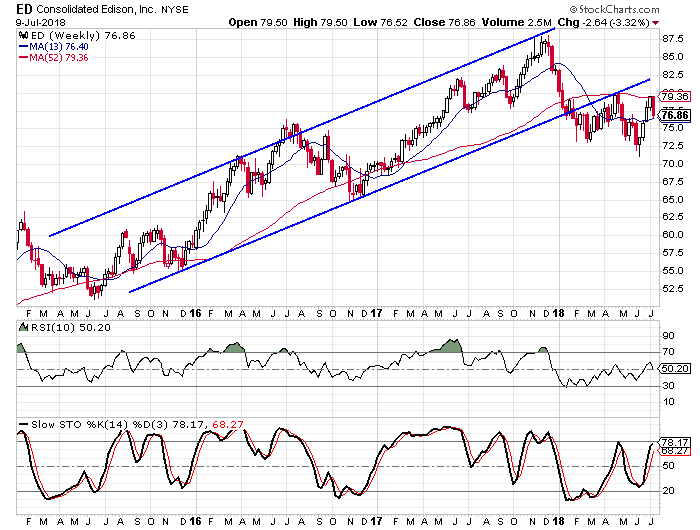 You can see on the chart how ConEd had been moving higher in a trend channel until it moved below the channel in February. Now is having trouble getting back in to an upward trend and it keeps finding resistance at its 52-week moving average. Combine those factors with the bearish crossover from the daily stochastic readings and those are the main drivers behind this trade idea.