All four indices moved higher after the jobs report on Friday. The report showed more jobs added in June than predicted, but it also showed the unemployment rate jumped to 4.0% from 3.8% which was unexpected. The Nasdaq led the way with a gain of 1.34%. The Russell and S&P registered similar gains of 0.87% and 0.85%, respectively. The Dow lagged the other indices and still registered a gain of 0.41%.

All ten main sectors moved higher on Friday with two gaining more than one percent. The healthcare sector led the way with a gain of 1.44%.

[hana-code-insert name=’adsense-article’ /]That gain was helped by a 19.6% jump by Biogen (Nasdaq: BIIB).

The tech sector was the second best performer with a gain of 1.17%.

Consumer staples and industrials lagged the other sectors but still managed to log gains of 0.31% and 0.35%.

My scans extended their streak of bullishly skewed readings with 23 names on the bullish list and only five names on the bearish list.

The stock on the bullish list that caught my eye was Rio Tinto (NYSE: RIO).

The metal miner and producer scores a 64 EPS rating from IBD and an A on the SMR rating. The company saw its EPS grow by 35% last quarter while sales grew by 13%. It also boasts a solid profit margin and return on equity. 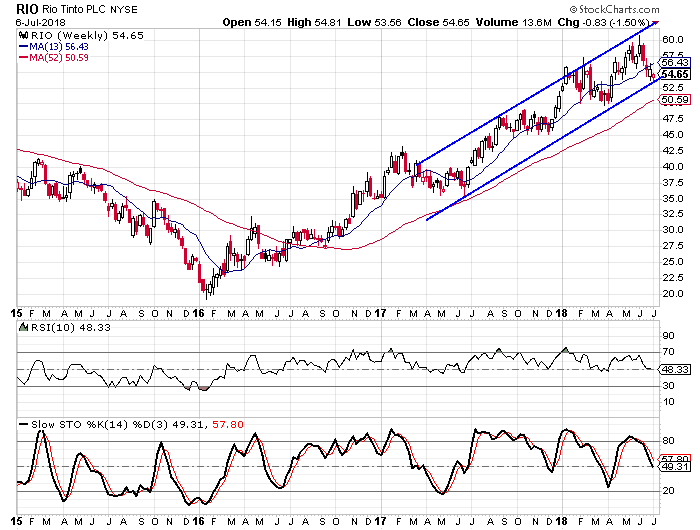 Rio has been moving higher since early 2016 and the stock tripled from the low to the high. Over the last year and a half the stock has formed a pretty tight trend channel. The stock just hit the lower rail of the channel and looks poised to make its next upward move. I took note of the 10-week RSI dipping below the 50 level and how it has rallied after such occurrences in the last few years. The instances from last June, November, and April were greeted with gains of over 20%.