All four indices closed higher yesterday, but that is not how they started the day. All four of them opened significantly lower and then rallied to close higher. The Nasdaq and the Russell turned positive early in the afternoon and they were the leaders as a result.

The Nasdaq gained 0.76% and the Russell gained 0.73%. The S&P and Dow didn’t move in to positive territory until the final hour of trading and the finished with gains of 0.31% and 0.15%, respectively.

[hana-code-insert name=’adsense-article’ /]For the second straight session, seven sectors finished higher on the day on Monday, but this time there were three that finished lower instead of only two.

The tech sector led the way with a gain of 0.89% while the utilities sector was the second leading gainer with a move of 0.71%.

The energy sector was the worst performer with a loss of 1.51%.

My scans were decidedly skewed toward the bullish side once again with 104 names on the bullish list and only 14 on the bearish list. This caused the barometer to jump from 64.6 to 81.1.

One name in particular that caught my eye on the bullish list was TD Ameritrade (Nasdaq: AMTD). The company scores a 96 on IBD’s EPS rating and an A in the SMR category. The most recent quarterly earnings report showed EPS growth of 66% and sales grew by 57%. 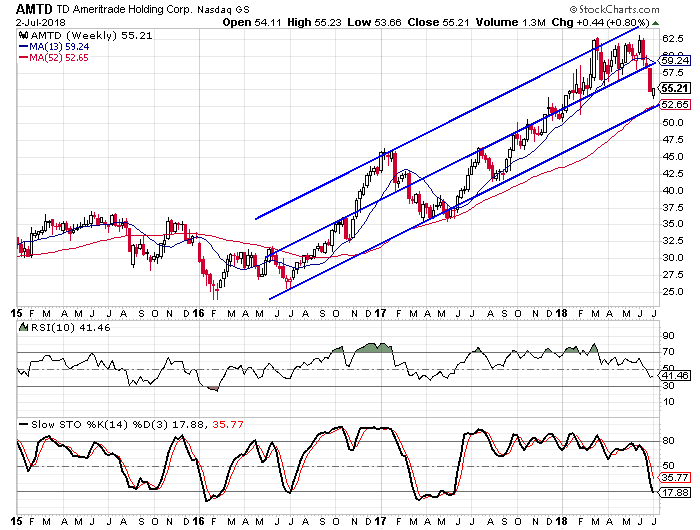 AMTD has been trending higher for several years now and a trend channel has formed as a result. The stock is close to the lower rail of the channel and the daily stochastic readings just made a bullish crossover.

Buy to open the Aug18 55-strike calls on AMTD at $2.40 or better. These options expire on August 17. These options will need to reach $59.80 in order to double, but that only takes the stock to the midway point of the channel and that seems reasonable. I would suggest a target gain of 100% with a stop at $54.