After hovering near breakeven for most of the day, all four indices moved higher in the afternoon and all four ended in positive territory as a result. The Nasdaq led the way with a gain of 0.79% with the S&P finishing with the second best performance with a gain of 0.62%.

The energy sector was the worst performer with a loss of 0.13% and the utilities sector logged a loss of 0.04%.

My scans flipped back to a bullish skew with 71 bullish signals and 17 bearish signals.

Of the 17 bearish signals, 11 came from the utilities sector.

The overall results caused the barometer to jump to 25.6 and that is the highest reading since May 7.

Given the number of choices on the bullish side and the limited options on the bearish side, it stands to reason that I have a bullish idea for you today. Citrix Systems, Inc. (Nasdaq: CTXS) appeared on the bullish list last night and the stock scores very well on the IBD ratings. The EPS rating is a 90 and the SMR rating is an A. 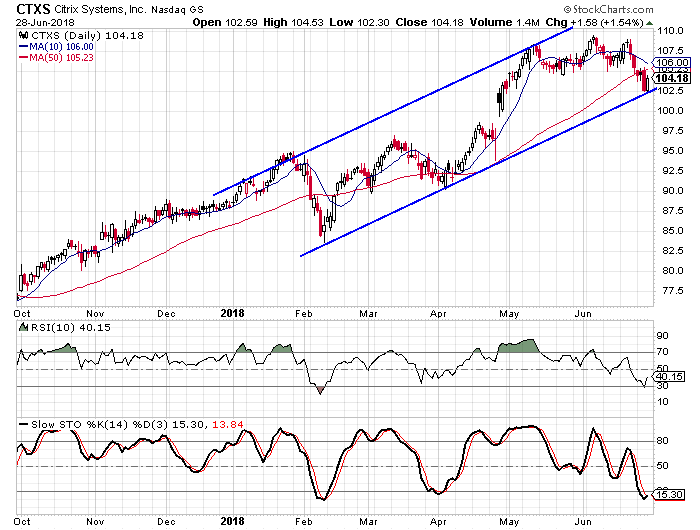 We see on the chart that CTXS has been trending higher over the past nine months and a trend channel has formed over the last five months. The stock just bounced off of the lower rail of that channel. We also see that the stochastic readings made a bullish crossover out of oversold territory for only the third time in the last nine months. Each of the other two instances were really good bullish signals and the basis for the lower rail.

Buy to open the Aug18 100-strike calls on CTXS at $7.20 or better. These options expire on August 17. For these options to double the stock will need to reach $114.40 and that is 9.5% above the current price. When the stochastics made their bullish crossovers in February and April, the stock jumped at least 16% each time. I would set a target for the gain of at least 100% or possibly for the stock to reach $118, whichever one you are more comfortable with. I would use $101 as a stop.