The indices all opened higher yesterday and the Dow and S&P had pretty impressive gains in the morning session, but all four turned south and finished lower. Continuing concerns about international trade were cited as the main reason. As for the performances, the Russell experienced the worst loss at 1.68% followed by the Nasdaq with a drop of 1.54%. The S&P lost 0.86% and the Dow finished with a loss of 0.68%.

The energy sector and the utilities sectors were the only two that managed to log gains yesterday with energy leading the way with a gain of 1.33%.

That snapped the three-day streak of bullish skews.

After adding the figures in to the barometer calculations it dropped to 9.1 from 19.6.

The stock that caught my attention most last night was Nutrien Ltd. (NYSE: NTR) and it was on the bearish list. The fertilizer and feed producer scores a 21 on IBD’s EPS rating and a C in the SMR rating. Both earnings and sales have been on the decline for the last three years. 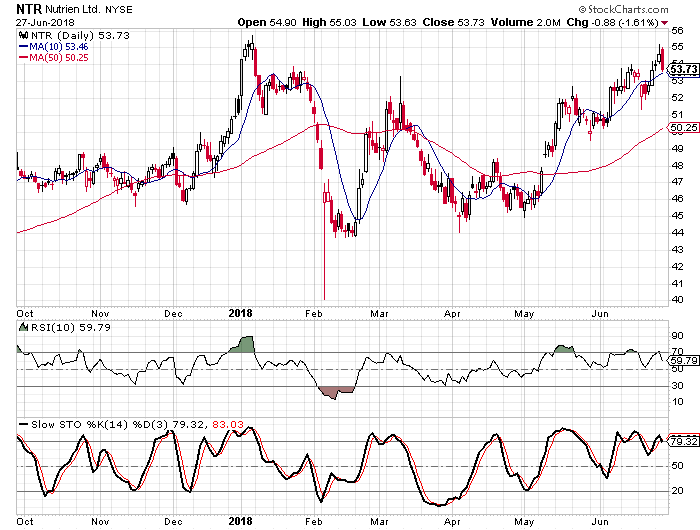 NTR hit the $55 level back in January and then fell sharply. Yes many stocks peaked in January and fell, but NTR peaked well before the rest of the market. The weekly stochastic readings are in overbought territory just as the daily ones are, but this is the first time since January that the weekly readings have been there.

Buy to open the Aug18 55-strike puts on NTR at $3.00 or better. These options expire on August 17. For these options to double, the stock will need to drop to $49. That seems like a reasonable expectation and would therefore set a target of 100% for the gain. I would also suggest a stop-loss point of $55.25.