Seven sectors moved higher on the day with the energy sector leading the way with gain of 1.28%. The consumer discretionary sector finished with the second best gain at 0.71%. Those two sectors were the worst performers yesterday.

[hana-code-insert name=’adsense-article’ /]No other sector gained over a half percent.

Consumer staples, financials, and healthcare were the three that lost ground with losses of 0.44%, 0.30%, and 0.29%, respectively.

My scans produced 60 bullish signals last night and there were 24 bearish signals.

This is the third straight night where the number of names on the bullish list has exceeded the number on the bearish list.

My barometer jumped to 19.6 from 6.4 as a result and that is the highest reading since June 4.

The one name that stood out the most to me was on the bullish list and it was Texas Instruments (Nasdaq: TXN). The chipmaker scores an 87 on IBD’s EPS rating system and it gets an A in the SMR rating. The company has seen strong earnings and sales growth in recent years. 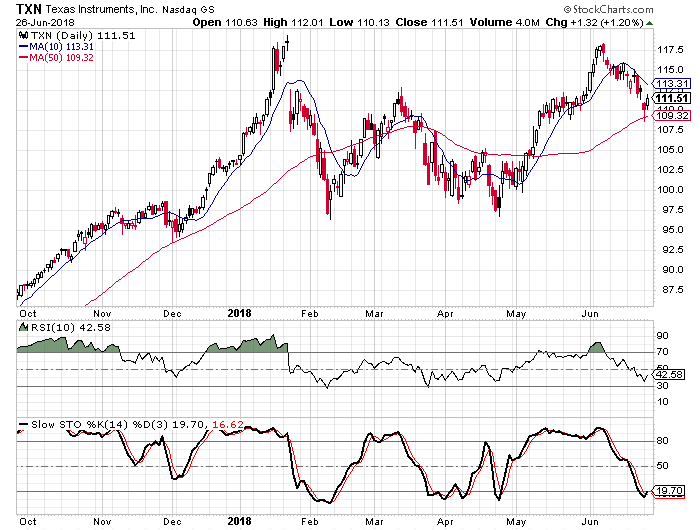 Buy to open the Aug18 110-strike calls on TXN at $5.30 or better. These options expire on August 17. With the price of the options and the price of the stock, we only need the stock to a gain of 8.1% for these options to double. I suggest a target of 100% for the gain and I would shut the trade down if the stock closes below its 50-day moving average.