All four of the main indices fell yesterday with the Russell suffering the worst loss at 1.06%. The Nasdaq lost 0.88%, the Dow lost 0.8% and the S&P had the best performance while losing 0.63%. The factors cited for the decline were ongoing trade concerns and the Supreme Court decision to allow states to charge sales tax on internet purchases.

Eight of the ten main sectors moved lower on the day with the only two in the green being utilities (+0.34%) and consumer staples (+0.2%).

[hana-code-insert name=’adsense-article’ /]Of those that were in the red yesterday, there were three that lost over one percent and they were led by the energy sector with a loss of 1.88%.

This came as OPEC met and agreed to boost output.

My scans remained bearishly skewed and with the big down move the margin widened last night.

Today’s trade idea is a bearish one on Kinder Morgan (NYSE: KMI). The oil and gas transporter is average in the fundamentals with an EPS rating of 60 and an SMR rating of a C. EPS growth is flat over the last three years and sales have been shrinking over the same period. 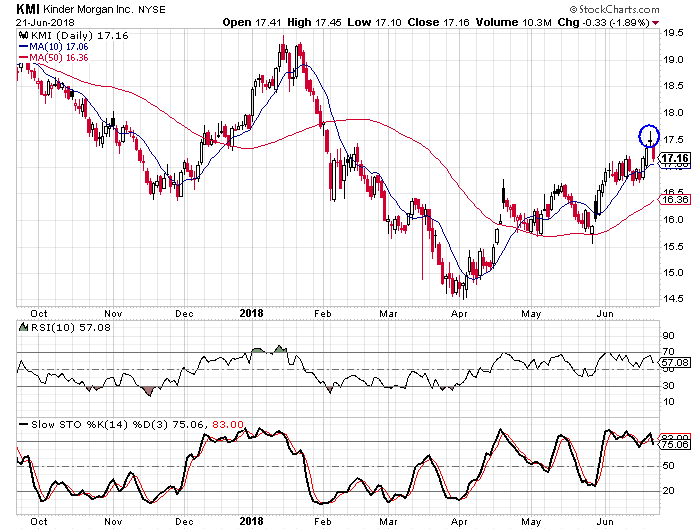 The chart for KMI shows what some would call an island top or in candlestick lingo an abandon baby top. The stock gapped higher on Wednesday and stayed above the range from Tuesday, but then gapped lower yesterday and stayed below Wednesday’s range. This is a bearish signal and it is also happening just below the stock’s 52-week moving average. The stock hasn’t closed above the 52-week since April of 2017.

Buy to open the Aug18 18-strike puts on KMI at $1.25 or better. These options expire on August 17. The stock will need to drop to $15 for these options to double and that would mean a decline of 15% from the recent top. If you look back at the decline in late January and early February, that was just over 15%. I suggest a target of 100% on the gain with a stop at $17.75—just above the recent high.