Three of the four main indices moved higher yesterday with the Russell leading the way again with a gain of 0.84%. The Nasdaq gained 0.72% as the second best performer and the S&P gained 0.17%. The Dow lagged the other three once again and lost 0.17% on the day.

[hana-code-insert name=’adsense-article’ /]The materials sector was the biggest loser on the day with a decline of 0.32% and it was followed closely by the financial sector with a loss of 0.26%.

My scans produced more bearish signals than bullish signals again last night, but the margin was the narrowest that it could be—one.

Continental Resources (NYSE: CLR) appeared on the bullish list last night and it has decent fundamentals. The EPS rating from IBD is a 76 and the SMR rating is a B. 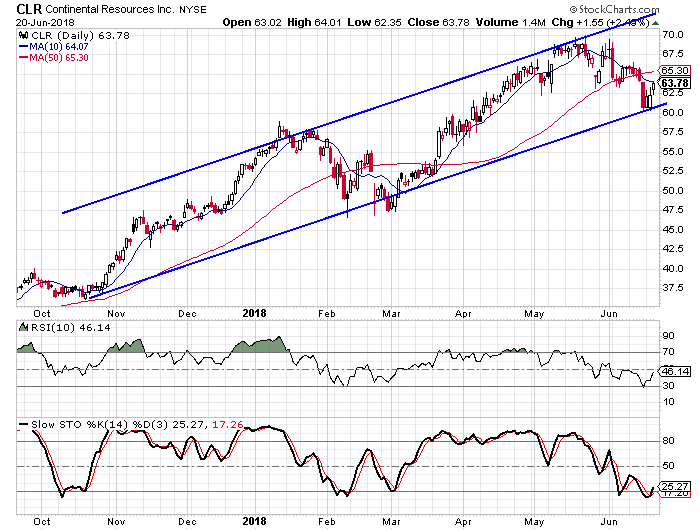 CLR has formed a trend channel over the last nine months and the stock just bounced off of the lower rail. The stochastics have made a bullish crossover as they did in March and also in February and last October. Each of these instances came ahead of solid rallies in the stock.

Buy to open the Aug18 60-strike calls on CLR at $6.50 or better. These options expire on August 17. For these options to double, the stock will need to reach $73. That means it will have to jump almost 15%. Usually I would say that is a little farfetched, but when I look at the previous times the stock has seen its stochastic readings in oversold territory and then rallied, 15% seems like no big deal. I suggest a target of 100% for the gain with a stop at $60.