The four main indices were split yesterday with two moving higher and two moving lower. The Russell 2000 led the way with a gain of 0.51% and the Nasdaq gained 0.01%. The Dow lagged the other three and lost 0.41% and the S&P lost 0.21%. All four opened sharply lower after trade tensions escalated over the weekend.

Seven of the ten main sectors moved lower yesterday with the consumer staples sector finishing with the worst loss at 1.44%. The healthcare sector was the second worst performer with a loss of 0.95%.

[hana-code-insert name=’adsense-article’ /]The energy sector was the leading sector with a gain of 1.0%.

Tech and utilities were the other two in positive territory.

My scans produced 32 bearish signals last night and there were 10 bullish signals.

The differential of 22 is the narrowest since June 8 and the barometer moved to -29.8 for its highest reading since that date.

Today’s strategy should be familiar if you have been following my option trade ideas for any length of time.

It will mark the third time Philip Morris International (NYSE: PM) has been the subject stock.

We had a bearish play on January 26 and again on April 19. The company has seen earnings and sales shrink in recent years as tobacco use continues to decline worldwide. 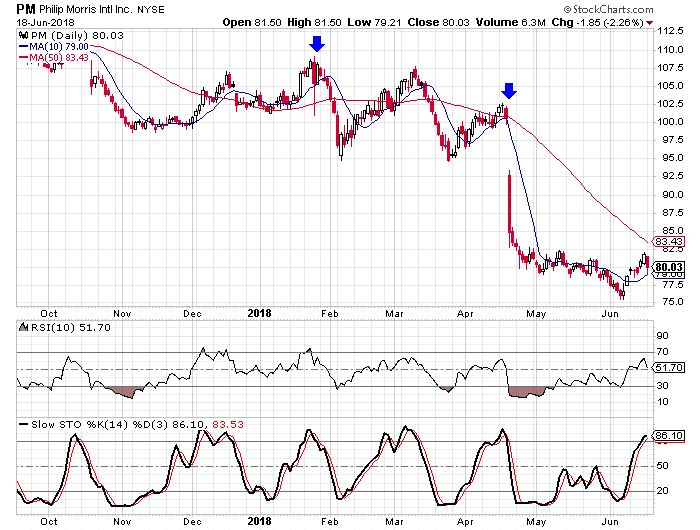 The two previous bearish trade ideas are marked with the blue arrows. You can see how the stock moved back in to overbought territory on the stochastic readings for the first time since our last bearish trade. I am looking for another big drop in the month ahead.