All four of the main indices finished lower on Friday, but they all closed well off their lows. The S&P lost 2.83 points (-0.1%) on the day after being down over 20 points in the first hour of trading. The Russell lost the least with a decline of 0.05% while the Dow was the worst performer with a loss of 0.34%. The Nasdaq lost 0.19%. The negative tone was set after the latest round of tariffs against China were announced.

The sectors were split on Friday with five moving higher, four moving lower and one sector (financials) unchanged.

[hana-code-insert name=’adsense-article’ /]On the plus side, the consumer staples sector led the way with a gain of 1.28% followed by the utilities sector with a gain of 0.71%.

As far as the sectors in the red, the energy sector was by far the worst performer with a loss of 2.15%.

For the seventh day in a row my scans were bearishly skewed on Friday.

My barometer came in with a reading of -36.3 and that is the fifth straight day the reading has been between -35 and -45.

Hertz Global Holdings (NYSE: HTZ) was one of the stocks on the bearish list and the company’s fundamentals are very weak.

The EPS rating from IBD is only a 15 and the SMR rating is an E. The company has a -2.4% profit margin, no return on equity, and no earnings growth. 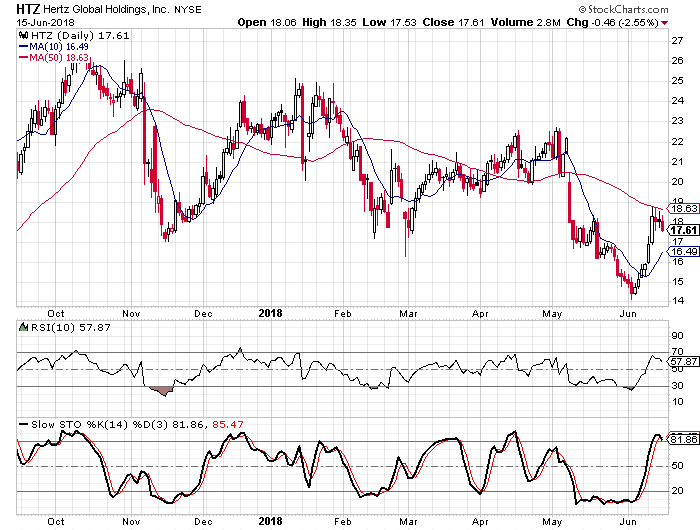 Buy to open the Jul18 19-strike calls on HTZ at $2.10 or better. These options expire on July 20. I would have preferred to buy more time than just a month, but the next expiration after the July options are the Octobers. That raised the premium too much. With the July options you will want the trade to move in the right direction immediately. I would target 100% for the gain and that would mean the stock was below $15 which seems possible. I would use a close above the 50-day as the stop.