The indices finished mixed yesterday with the Dow being the only one of the main four that lost ground. The Nasdaq led the way with a gain of 0.85% followed by the Russell with a gain of 0.44%. The S&P gained 0.25% and the Dow’s loss was 0.10%.

Seven of the ten main sectors moved higher on Thursday and they were led by two sectors with gains over one percent. The utilities sector gained 1.22% and the consumer discretionary sector gained 1.04%.

[hana-code-insert name=’adsense-article’ /]Of the three sectors in the red, it was the financial sector that finished with the worst loss at 0.93%.

My scans produced 37 bearish signals and nine bullish signals last night and that is the sixth straight night with a pretty sizable discrepancy between the two lists.

The barometer came in with a reading of -40.2 after those figures were punched in to the calculation.

Even though the scans have remained bearish in their tone, the trade idea I have for you today is a bullish one and it is on Intel (Nasdaq: INTC).

The company has great fundamentals with an EPS rating of 93 and an A on the SMR rating from IBD. 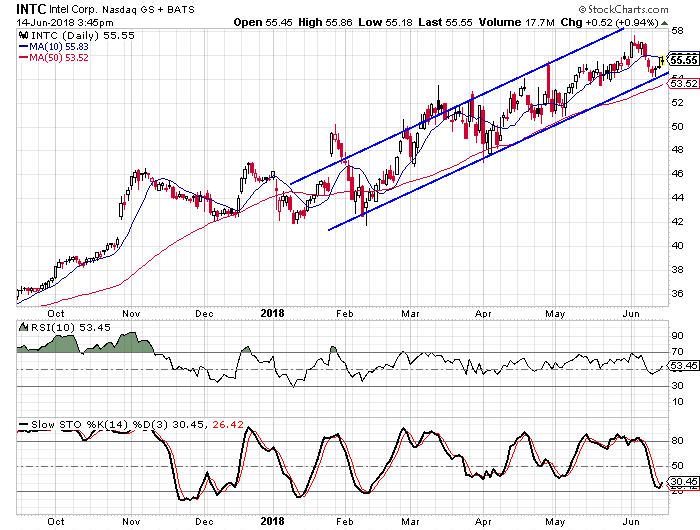 The chart shows how Intel has formed a trend channel since the low in February and that has helped guide the stock higher in the last few months. The stock has held up better than a lot of other semiconductor stocks, but it is the most oversold it has been since February. I look for the stock to rally to a new all-time high.

Buy to open the Aug18 55-strike calls on INTC at $2.80 or better. These options expire on August 17. The stock will have to move to a new high in order for these options to double, but I think it can do that. The target price for a double is $60.60 and that is only 9.1% above yesterday’s closing price. I suggest a target gain of 100% and a stop loss should the stock move below $54.50.