Stocks were quiet through the first half of the day, but then sold off at the end of the day after the Fed meeting. The Fed increased rates as expected, but they changed the outlook and increased the number of increases for this year up to four from three.

By the end of the day, all four indices finished lower. The Dow was the worst performer with a loss of 0.47% with the S&P losing 0.4% as the second worst performer. The Russell lost 0.34% and the Nasdaq was the best performer by only losing 0.11%.

[hana-code-insert name=’adsense-article’ /]Eight of the ten main sectors finished lower on the day with two losing over one percent.

The materials sector was the worst performer with a loss of 1.08% and the telecom sector lost 1.07% as second worst.

My scans continued with their bearish theme with 63 bearish signals and only five bullish signals.

This dropped the barometer to -44.3 and that is the lowest it has been since May 17.

For the second straight day I have a bearish trade idea for you. This one is on Camping World Holdings (NYSE: CWH). The company has been trending lower for some time now and the fundamentals are average with an EPS rating of 47 and an SMR rating of a B. The earnings have been declining rather than growing for the last three years and they dropped by 79% in the most recent quarter. 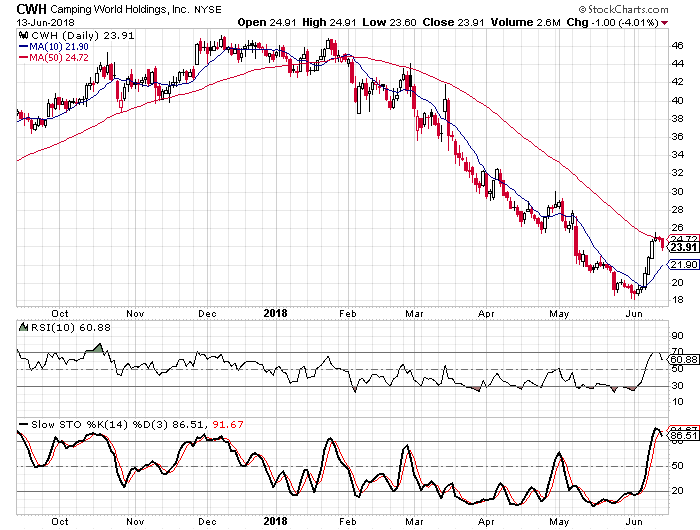 The chart shows how the stock has been declining since January. You can see how the 50-day moving average has been acting as resistance during the decline and the stock just hit it again. I look for the pattern to continue with the stock trending lower. The stochastic readings just made a bearish crossover as well and those have been good bearish signals during the decline.