Six of the ten main sectors were higher on Tuesday with the utilities sector leading the way with a gain of 1.18%. The telecom sector gained 0.54% as the second best performer and the tech sector gained 0.5% as the third best.

[hana-code-insert name=’adsense-article’ /]The energy sector lost 0.82% and was the worst performer on the day.

The totals from last night were 47 names on the bearish list compared to only 12 on the bullish list.

There were several stocks that caught my eye last night with one on the bullish list and two on the bearish list.

The one I felt the most confidence in was a bearish play on Johnson & Johnson (NYSE: JNJ). The company does have decent fundamentals with an EPS rating of 67 and an SMR rating of an A, but the EPS rating has slipped in recent months. It was above 80 back in February. 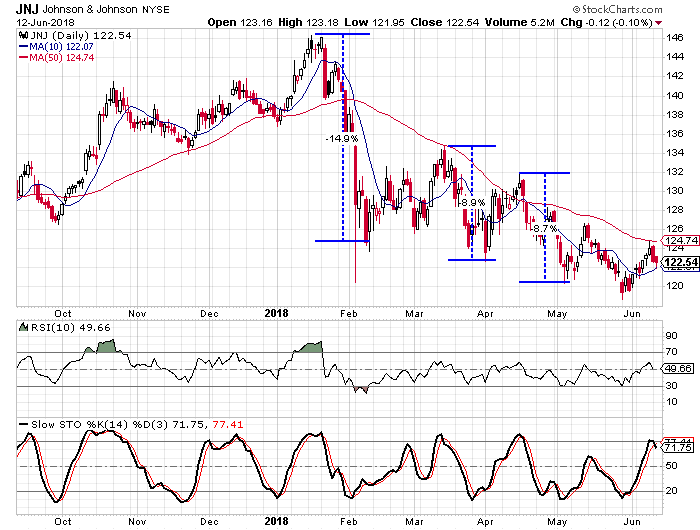 The last three times the stochastic readings have reached overbought territory and then made a bearish crossover are marked on the chart. As you can see the stock has lost from 8.7% to 14.9% on these moves. Now we have another one and it comes right after the stock hit resistance at its 50-day moving average.