Stocks moved higher yesterday on the eve of the summit between President Trump and North Korean President Kim Jung Un. All four of the main indices gained ground, but all four gave up some of their gains in final half hour. The Russell 2000 led the way with a 0.2% gain. The Nasdaq gained 0.19%, the S&P gained 0.11%, and the Dow lagged the others with a gain of only 0.02%.

[hana-code-insert name=’adsense-article’ /]The two sectors in negative territory were the utilities sector (-0.29%) and the financial sector with a loss of 0.18%.

The last three trade ideas have been either neutral or bearish ones, so I wanted a bullish trade idea to keep things relatively balanced in a week where I expect greater volatility.

One name that jumped out at me on the bullish list was Las Vegas Sands (NYSE: LVS). The casino and resort operator gets an EPS rating of 81 and an SMR rating of an A from IBD. 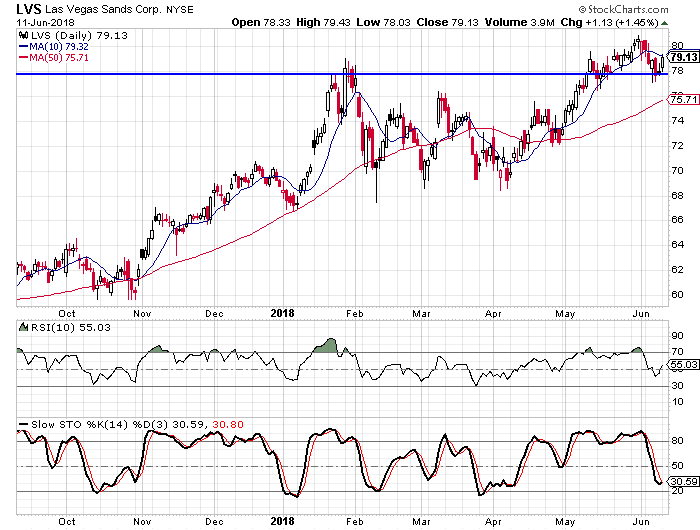 The chart shows how the stock struggled to move above the $78 level back in January, but now that same area appears to be working as support. We also see that the stochastic readings are getting ready to make a bullish crossover and that has been a good sign in the past.