Stocks experienced another big move higher on Wednesday with all three indices moving higher on the day. The rally came after China made an offer to increase its goal of purchasing more U.S. goods. The Dow led the way with a gain of 1.4% followed by the S&P with a gain of 0.86%.

The Nasdaq lagged the other two indices, but still managed a gain of 0.67%.

[hana-code-insert name=’adsense-article’ /]Nine of the ten main sectors moved higher on the day with the two main defensive sectors, utilities and consumer staples, lagging the others.

Despite the big up day, my scans produced more bearish signals than bullish signals last night.

With the rally over the last four days, all of the bearish trade ideas for the past few weeks have been stopped out, leaving us with nothing but bullish positions. With that in mind, I really focused on the bearish list tonight and have a bearish trade idea for you today. The stock is HCP Inc. (NYSE: HCP) and is a REIT with poor fundamentals. The EPS rating from IBD is only 8 and the SMR rating is a D. 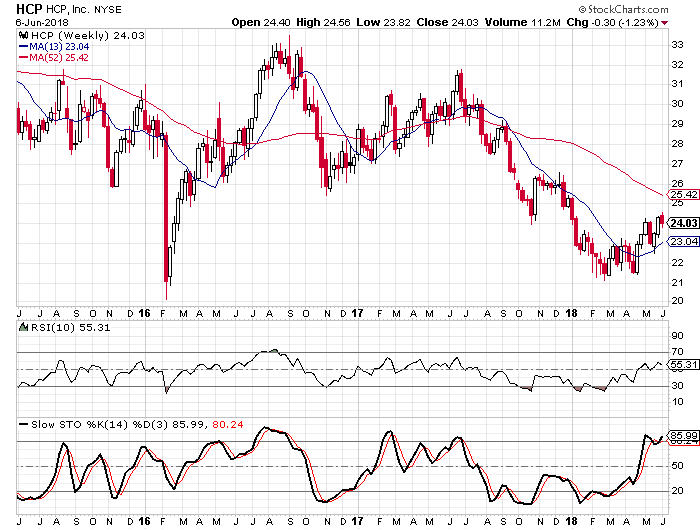 The weekly chart shows how HCP has been in a downtrend for the better part of the past year. It has rallied back over the last few months, but it still hasn’t overtaken its 52-week moving average. The stock is overbought on both the weekly and the daily stochastics and I look for another leg to the downside.