The sectors were split evenly with five moving higher and five moving lower. The materials sector led the way yesterday with a gain of 0.74% while consumer discretionary and telecom (0.59%) tied for the second best performance.

For a second straight night, my scans were pretty balanced last night.

The final tally from last night was 20 bullish signals and 19 bearish signals.

Adding those numbers in to the total caused the barometer to drop to 12.9.

With the balanced scan results for the last few nights, I am attempting to remain balanced with the trade ideas as well.

With that in mind, I have a bullish trade idea on Archer Daniels Midland (NYSE: ADM) for today. The company doesn’t have the best fundamentals, but this trade is based more on the chart than anything. ADM gets a 52 on the EPS rating and a D on the SMR rating. 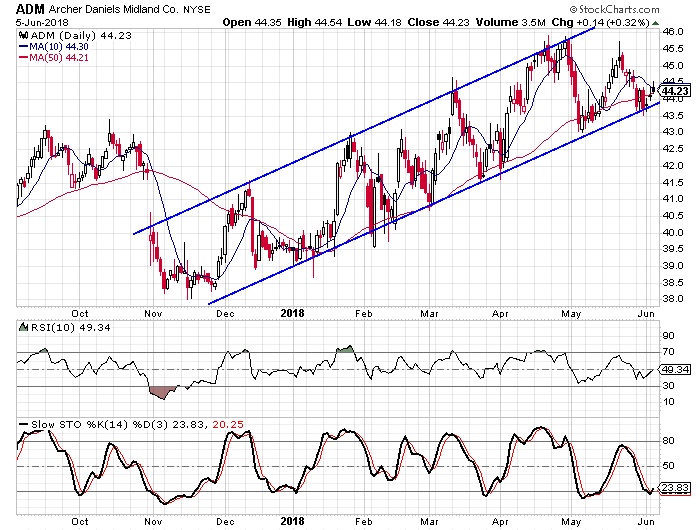 Even with all of the volatility in the market since the first of the year, ADM has managed to maintain its uptrend. That trend has been confined to a trend channel and the stock just hit the lower rail of the channel last week. The last four times the stock has been at or near the lower rail, it has rallied by at least 6% and most of the time it has bounced at least 9%.